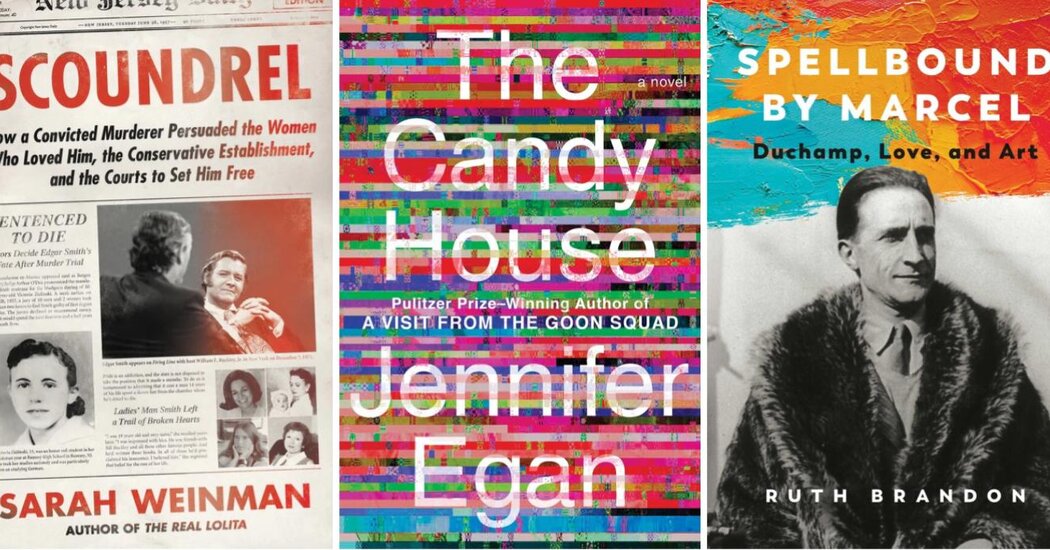 12 new books we recommend this week

REBELLION, by Joseph Roth. Translated by Michael Hofmann. (Library for all, $24.) Andreas Pum, the protagonist of Roth’s newly reprinted 1924 novel, loses a leg during World War I. It doesn’t really bother him. He believes in a just God, “the one who distributed shrapnel, amputations and medals to the deserving”. The little book describes his eventual disillusionment with this God and the government he had previously revered. “Andreas’ naivety and eventual enlightenment might have been cartoonish in the hands of someone less ironic and wise than Roth,” writes our reviewer John Williams. “Instead, he’s both likable and comical, and his final heartfelt cry against God is one for the ages.”

THE RETURN OF FARAZ ALI, by Amina Ahmad. (Riverhead, $27.) In this quietly stunning debut novel, a mid-level police officer in Lahore, Pakistan is sent to cover up the murder of a girl in the red-light district where he was born. The characters feel real, as does the violent collision of their intrigues and resignation, the depths of their longing. “Ahmad’s compassion and deep concern for the psychological and emotional nuances of his characters never wavers, no matter how monstrous, self-interested, or defeated they become,” Omar El Akkad writes in his review. “It stretches through generations and transformations of place, to a devastating final chapter, fully human, fully engaged with what makes us human, no matter how small the wounds or the immunity of those who hurt them. inflict.”

SENT BY MARCEL: Duchamp, Love and Art, by Ruth Brandon. (Pegasus, $27.95.) Brandon’s delightfully flat biography of Marcel Duchamp and the triangulated love affair between Duchamp, Beatrice Wood and Henri-Pierre Roché (the author of ‘Jules and Jim’) offers a deeply researched portrait of his time and immerses the reader at the heart of the avant-garde in which the art world was forever changed and conventional society was outraged. But perhaps the greatest pleasure, as Lauren Elkin writes in her review, is Brandon’s winning tale of the lesser-known Wood: making art.

REAL TRADE, by Sara Novic. (Random house, $27.) Novic’s tender, beautiful, and beaming with indignation second novel, whose title comes from an ASL phrase meaning “seriously,” takes readers into the classrooms – and families – of a group of students and educators at a school for the deaf where a 15-year-old girl with a faulty cochlear implant and an unstable family life has gone missing. The book is “moving, fast and spirited… but also skillfully educational,” writes Maile Meloy in his review. “Great stories create empathy and awareness more effectively than facts, and this important novel should – the real business – change minds and transform conversation.”

THE GREATEST INVENTION: A History of the World in Nine Mysterious Writings, by Silvia Ferrara. Translated by Todd Portnowitz. (Farrar, Straus & Giroux, $29.) Ferrara says she wrote this book as she talks to friends over dinner, and that’s exactly how it reads. Instead of telling a chronological story of writing, it moves freely from script to script, island to island, and offers a dizzying but very enjoyable narrative account of the evolution of written language. “She is constantly at our side, prodding us with questions, offering speculation, reporting exciting discoveries,” writes Martin Puchner in his review. “Some of Ferrara’s most ambitious ideas stem from his collaboration with scientists, including the claim that writing literally changes the brains of those who learn it.”

Colors of Courage: Sushant Divgikar aka Rani Ko-HE-Nur shares his experiences with drag as an art form