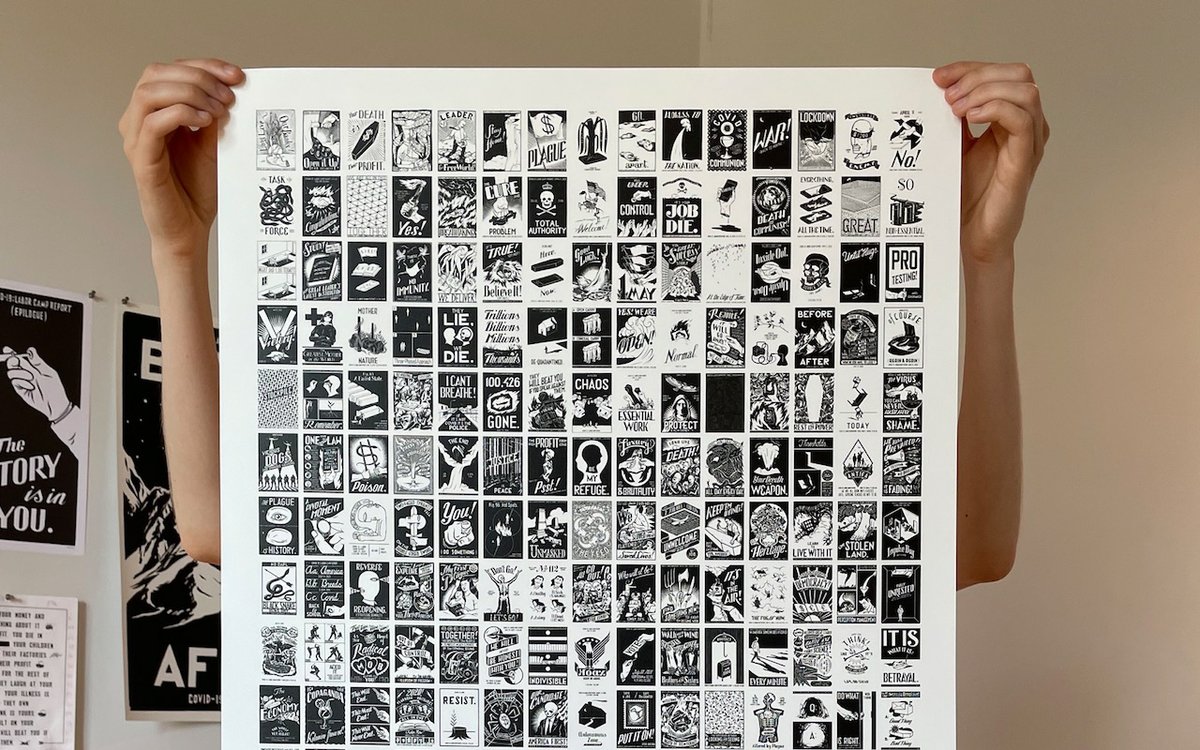 An Artist’s Daily Drawings of Life During COVID

On the morning of March 24, 2020, Piotr Szyhalski woke up from a strange dream. There he visualized a severed head grimacing on the ground with plants growing out of its eyeballs.

The image followed him throughout his morning cup of coffee, through his reading that President Trump was considering reopening the economy over objections from health experts, through news that the Senate was on. the point of a stimulus deal. Then, late in the morning, when Piotr hit a productivity deadlock, using a sheet from a stack of Bristol paper in his basement and his Japanese automatic drawing brush, he drew the dream.

Where the leaf branches sprouted from the sockets of the severed head, the words “Long live our banks” sprawled across the paper. At the bottom of the page read the words “COVID-19: Labor Camp Report: March 24, 2020.”

The next day, March 25, 2020, the MCAD art teacher woke up to draw a hand cutting a wound with a knife to let dollar signs bleed. “Open it! For business!” is written in the footer. The next day, a coffin with a dollar sign and the words “Your death is their profit”.

For the next eight months, Szyhalski would wake up every morning, read the news of the day, put together pieces of “news shards” (he began to collect phrases that marked him in the news and started a list. on his phone of those â€œâ€ fragments. â€â€œ When something explodes, bits of information stick in my head, â€he says. Instagram account @workcamp.

An art exhibit at the Mia, a traveling art exhibit plastered on the walls of city blocks and 2,000 art books out of print later, Szyhalski’s â€œCovid-19 Labor Camp Reportâ€ serves as poignant, everyday documentation of the collective anxiety of a country, frustration and confusion during a life-changing year.

Artists often respond to current events by recreating them in their respective works. During the Spanish Flu, Edvard Munch painted a portrait of himself with the disease in an impressionistic palette of dark blues, sickly pinks and reds, and green polka dots. In 1917, Morton Schamberg captured the isolation of the flu through an empty New York cityscape in black and white in [View of Rooftops]. And for the better half of 2020, Syzhalski spent an average of seven hours a day for 225 days, or 1,575 hours in total, absorbing news, taking stock of the country’s daily morale, and documenting everything with a sheet. of 14 Â½ by 21. of paper and an ink brush.

Born in Kalisz and raised in PoznaÅ„, Szyhalski came of age during the reign of the Communist Polish People’s Republic after World War II. He learned to speak English in high school classes in Poland, that’s when he read George Orwell’s book 1984. â€œYou can imagine,â€ Szyhalski told me, â€œunder the Communist regime in Poland, this book hit a bit too close to homeâ€.

It wasn’t until he started practicing art in the United States that he stopped seeing his second language as a disadvantage. â€œThis distance from the language, I see it more as a way to see events from a foreigner’s point of view. It’s the same idea that allows us to look at historical events of the past with a clearer mind, because we can see the big picture, â€says Szyhalski.

When he left for the United States in the early 1990s, Poland had just undergone a systemic transition of government power, overthrowing its communist regime, relaunching parliamentary elections, reforming the market and embarking on massive privatization. ladder. Before 1990, the Polish elections were “a performative joke”, according to Szyhalski. â€œI never voted because it just didn’t matter,â€ he says. Now in the United States as a legal alien, Szyhalski still has not voted in an election.

â€œThere is a sense of urgency, or a kind of responsibility, to be present in this democratic space. So I like to think that somehow I can vote through my job, â€he says.

Szyhalski spent a few years in the Northeast before moving to Minnesota in 1995 to accept a teaching position at MCAD. He has taught young artists everything from graphic design and propaganda art to media art and performance-based art installations, a central part of his own work.

Waking up to absorb the day’s headlines, doggedly drawing pictures, posting them to an account, and engaging with viewers, Szyhalski says, is a performance in itself. After the project started and other people followed his trip to the labor camp, he spent his days discussing the photos with disciples.

â€œI look at this project and see it as an event where I was committed one hundred percent of the time. I not only shared the designs, but also the process of creating the designs, developing ideas and participating in hundreds and hundreds of conversations with people during that time, â€he says. “I really think it was an eight month performance.”

Mia Labor Camp commissioned the labor camp from mid-March to mid-September 2021, where he lived on the walls of Gallery 370. Upon entering the space, stylized fonts and phrases from a way reminiscent of wartime propaganda submerges you in a sea of â€‹â€‹stark whites and sharp blacks. The words come out of the posters on the walls and pop into your head: “THEY LY, WE DIE”, “I CANNOT BREATHE!” IF IT’S NOT COVID, IT’S THE POLICE â€,â€œ LISTEN, DEBATE, DISBASE, VOTE. ”

â€œEven though we are talking about supposedly opposing systemic structures – communism and capitalism are supposed to occupy opposite ends of the spectrum – the experience of last year,â€ Szyhalski says, â€œin a very depressing way, reminded me so many weird echoes and unfortunate parallels to the kind of experience of living in Poland under a very different system.

Now the project is living like a book, with 2,000 copies out of print. While it’s currently difficult to get a hold of any of these books, interested readers can watch the project where it started, on Szyhalski’s Labor Camp Instagram.

On Election Day 2020, the 225-day labor camp documentation came to an end. â€œI can’t imagine or I couldn’t imagine at the time continuing to work on this project with the same tone, with the same language, and all kinds of strategies that I developed over the eight months. For Szyhalski, the day felt like a chapter was over.

A year later, I asked him if he thought things had changed since the labor camp elections ended. â€œMarginal gains have been made,â€ he says. “The damage over the past five years is going to be exponentially more dramatic than I could have imagined.”

We have seen a rise in populism around the world and the country is more politically polarized than ever. â€œBut it happened here. It would be the last place I would expect something like this to take hold, but it does. “

So what’s the next step? How do we come out of all the horror that we have collectively experienced throughout the pandemic, through injustice, through a world that willfully opens a sore as the dollar signs gush with blood?

â€œIt will take a lot more work that really goes beyond politics. The kind of structures we’ve learned to rely on for some kind of stability as a culture, I think we can’t rely on anymore. They’ve been compromised to such an extent that the only thing we have left is the other. And I honestly feel that for me, this project, when I look back on it, it’s the sense of community that emerged from it that I find real hope in, and it’s the fact that we were able to connect and find a foothold in that connection to each other, one way or another. It is for me the real currency, the real value of the whole. That’s why it was worth it.

What if the “Birds Are Not Real” movement backfires? + More questions I have about the artistic news of the week