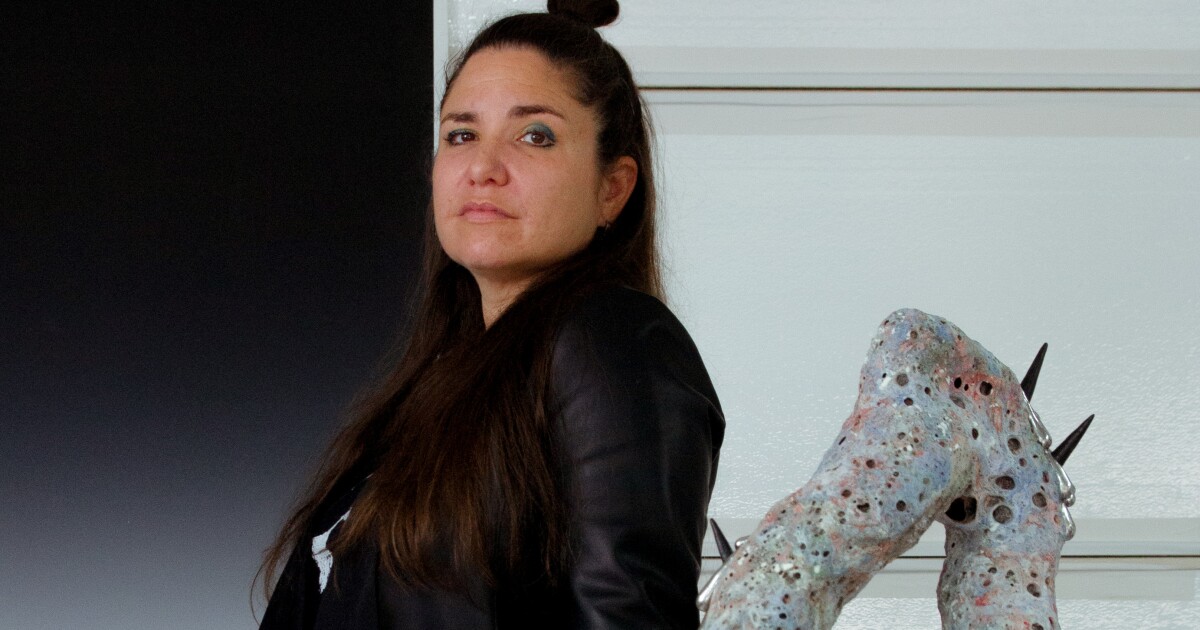 Artist Sasha Koozel Reibstein is aiming for the stars

Just before heading to Quint Gallery in La Jolla, I take a moment to watch locals and tourists pass by the space. I’m early for my interview with Sasha Koozel Reibstein, a local sculptor whose new show, “Are You Okay in the Dark?”, recently opened at the gallery.

To understand Reibstein’s work is to know intimately the place between discomfort and bewitchment. For more than a decade, she has constructed stunningly colorful sculptures from her home and studio in La Mesa. Her work is beautiful and piercing, shining and resplendent using glitter and drops. It can also be deeply unsettling, with its geological textures, bases that seem to liquefy under weight, and in some cases spikes and shards that protrude like a protector.

This is most clearly represented in “Devoring a Star”, the Reibstein piece that is currently displayed in the Quint Gallery window. It is one of his first pieces intended to be mounted on a wall rather than displayed on a surface. It has an almost typographic quality, somewhat disconcerting in nature and not just because of its protruding black flocked fabric spikes.

As I visit, I see two people stop at the window to admire it, its streaks of 24-karat white gold glistening in the afternoon sun. They marvel, scratch their chins, and in the case of a passerby, they shake their heads before walking away.

“I nailed that one by the skin of my teeth,” Reibstein says once I’m inside the gallery. She adds that it had been more than a decade since she had made a sculptural piece intended to be mounted on the wall. “I want to do thousands more.”

When I point out the intimidating nature of the piece, Reibstein smiles mischievously and simply says “thank you.” And that’s just it, really. Reibstein creates very reactive works, but the reactions they elicit are highly dependent on the person viewing the piece and where they are at in their own life. Ceramics, as a practice, can be frustrating and reactive on its own, but Reibstein fully embraces this chaos, experiments with new materials and works almost scientifically to create his otherworldly pieces.

“My aesthetic has changed drastically, mostly in a tighter direction,” says Reibstein, who grew up in Philadelphia. “Texture was always very present to me, but it was always this messy, physical thing. And so refining it and controlling it is the dramatic difference in my work now.

Since moving to the San Diego area, Reibstein has featured her work in dozens of group and solo exhibitions. She won an Emerging Artist San Diego Art Prize in 2016, worked as a gallery director at the Boehm Gallery in San Marcos, and currently heads the ceramics department at Palomar College. Even with all of these things going on, Reibstein’s own work has evolved exponentially over the years. While some local artists will simply find a form and practice that suits them and stick to it, the works exhibited at “Are You Okay in the Dark?” are representative of an artist working not only at the peak of her craft, but also someone whose personal perspectives have shifted to directly embrace her personal experiences with motherhood, trauma, and mental health.

“There’s a clarity to my thinking now that I wasn’t able to experience before and it’s helped me refine some of the things that I do,” Reibstein says. “Just tighter and probably more beautiful. I feel less chaotic with myself and that’s probably reflected in the rooms.

Even some of Reibstein’s signature elements, such as the use of drip shapes she started using in 2018, took on a different feel. She says that at the time, using the drops was about “falling apart” or “giving up”, but she now sees them as something more optimistic and representative of her overall outlook on life.

“It was this idea of ​​’when do you fall apart’,” Reibstein recalls. “And that evolved tremendously until it became if it was about releasing or letting go of something. Maybe something alive and growing, and also embodying transformation and giving the impression that these objects are in motion.

This idea of ​​”letting go” is common throughout the pieces of “Are You Okay in the Dark?”. Reibstein uses broad scientific concepts such as astrophysics and astrobiology to solve interpersonal problems, the concept of time travel to solve intergenerational trauma, interstellar portals to solve existential fear. For Reibstein, who has dealt with issues such as miscarriages and infertility for the past decade, she has begun to examine the issues of her own family with similar traumas. She talks about her great-grandmother fleeing Russia and losing five children in the process while imprisoned. Only one of his children, Reibstein’s grandmother, arrived in the United States.

“I’ve done research on intergenerational trauma, and I know how it can change your genes, so I was really thinking about it, and how space is a way to separate from the present moment, how time works like a construct,” says Reibstein. “The idea of ​​stopping time and maybe coexisting with them, a way of connecting with them and separating myself from the here and now.”

One thing that informed this perspective is his 9-year-old son who, like most children, is beginning to explore these types of scientific concepts. For example, Reibstein points out how she learned from her son how astronauts have a thin layer of gold on their visors to protect them from UV rays. She says her understanding of gold, particularly in her work, was limited to its emission of light, rather than the use of light as a protector. In current pieces such as “Astral Crust” and “Crazed Heaven and Groaning Earth”, the viewer can see this shift in perspective, with Reibstein’s gold drops appearing to push down on the piece to perhaps, one day, protect it. completely. external forces.

“I’m just making this literal connection, that it has a resonance that I didn’t even know about,” Reibstein says. “Thinking of it as a protective light which also references my thoughts on the light from within coming out, as opposed to the darkness absorbing and consuming you. That was a reiteration; it highlighted some subconscious things and gave them more value.

To say that Reibstein’s current work is “beautiful” is a distinction she still finds a little dubious. It is, in my opinion, one of the finest works currently being produced in San Diego, but it is also, to paraphrase Rodgers and Hart, spellbinding, awkward, and disconcerting in a way that makes passers-by in La Jolla stop, notice and scratch their chins. Much like an astronomer trying to map the stars, Reibstein learned to work in the unknown. She embraced the messiness of the universe and the difficulties of life, creating mini-monuments of her time on this astral plane.

“I didn’t find work calming before, but now, in all aspects, I’m able to appreciate the need for calm and, especially in the last couple of years, the need for escape,” says Reibstein. “My work can do that and it has value. This idea of ​​pure escape, something that can be magical and unrecognized; accepting that and wanting to be able to offer it to other people. I never want people to look at it and say, “I know what it is. I want them to look at it and be like, ‘Ooh, what is this?’ »

Sasha Koozel Reibstein: “Are you good in the dark?”

When: Open 11 a.m. to 5 p.m. Tuesday through Saturday. The exhibition runs until March 5. The artist talk will take place on Saturday, February 26 at 11 a.m.

Combs is a freelance writer.