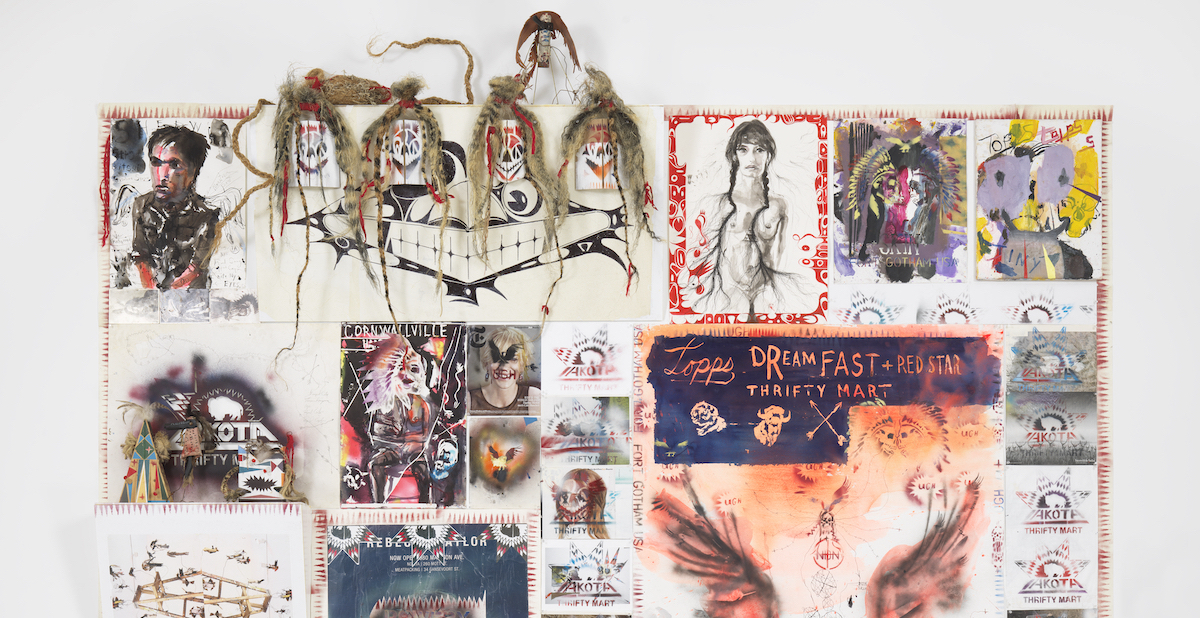 Brad Kahlhamer and the Fusions of Existence

A little boy stands next to a Saguaro cactus in an enlarged black and white photo inside the Tucson Museum of Art. Born in 1956, the boy is Brad Kahlhamer, a New York and Arizona-based multimedia artist whose creative practice reflects his daily attempts to find and create his own identity. The exhibition Brad Kahlhamer: 11:59 a.m. in Tucson is named after the artist’s time and place of birth but also references the 1957 film 3h10 to Yumawhich takes place in the American West.

Kahlhamer was born to Native American parents whose tribal affiliation he never knew and was adopted as an infant into a German-American family who would eventually settle in the Midwest. Hence the hybridity that serves as a common thread in his work, composed mainly of paintings, sculptures, works in mixed techniques and installations. More than 60 pieces created between 1996 and 2018 show how he tried to make sense of his personal history and the ambiguities of his life.

They include “Old Tucson III” (1996), a multimedia installation that combines romanticized notions of “Old West” towns with Kahlhamer’s memories of models he built as a child, and two hanging sculptures, each titled “Chandelier Nest” (2013), in which birds and nests set in human forms signal nature’s interaction with technology. Hanging in opposite corners of a small passageway, they cast shadows on the walls like whispers that will echo for generations.

One of the first works viewers see is “Skull Project” (2003-2004), which is made up of hundreds of renderings of skulls. This work in graphite, ink, gouache and watercolor on paper reveals how Kahlhamer uses expressive marks to constantly rework his own tentative assumptions and explore his emotions.

In another space in the gallery, a mural installation titled “Community Board” (2002-ongoing) speaks to how identity is formed in relationship and community rather than in isolation. The “Board” includes his own works of art, photographs and other items he has kept over the years, as well as items brought in by others he has met on his travels. A concert poster alludes to his deep interest in music, while an artwork by Ted DeGrazia hints at his concerns about how mainstream culture stereotypes and seeks to take advantage of native culture.

Connections to Indigenous forms of cultural expression abound in this exhibition, which is one of two solo exhibitions the artist opened in Arizona this spring. Inside a display case, “Nomadic Studio 1-12 sketchbooks” recall Indian designs from the late 19th and early 20th centuries. The books are filled with words and sketches made during travels or hikes, serving to chart the course of Kahlhamer’s curiosity.

Behind a small gallery wall with a poem written by Natalie Diaz, the museum features “Super Catcher The Sun Weave” (2018), a suspended sculpture made of wire, jingles and powwow bells that embellishes the form of a woven dreamcatcher for dramatic effect. The katsina dolls that Kahlhamer first encountered at the Heard Museum in Phoenix inspired him to create the “Next Level Figures” (2013-2014), multimedia pieces he designed as companions whose tribal ambiguity reflected his.

Twenty of the figures created with materials such as wood, fabric, wire and hair are on display in Tucson, where a cluster in the center of a museum gallery suggests a casual gathering of friends greeting those who walk among them. Elsewhere in the exhibition, the figures are precisely aligned; the symmetry of their arrangement suggests the role of guardian.

Throughout the exhibition, the artist makes masterful use of repetition. Several works of art incorporating the word “Ugh” evoke stereotypes of Indigenous peoples, and many pieces with painted, drawn, or sculpted hair address the impact of appearance on identity.

Two short videos featuring music written and performed by Kahlhamer complete this fascinating and comprehensive exhibition. In the museum lobby, viewers see images of the artist and his work scrolling across the screen in “Bowery Nation” (2014). Another video, titled “Dark Hair” (2010), plays inside a gallery, where people repeatedly hear the refrain “dark hair, dark eyes” as they move between artworks. art that inspires them to consider the ways in which the artist’s identity and their own identity, can still be a work in progress.