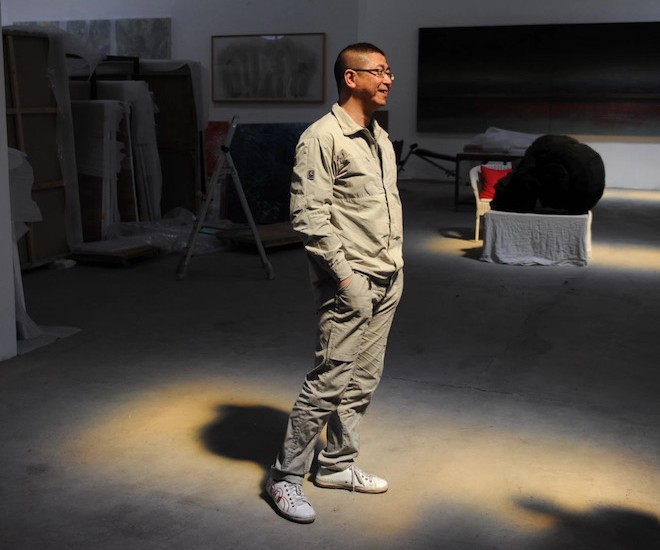 Chinese artist Zhang Zhaohui is on a mission to bring traditional Chinese ink painting to a global audience. To distinguish his paintings from his contemporaries, Zhang incorporated elements of the West into his ink drawings. The results are works of art that look and feel modern.

Organized by Marina Oechsner de Coninck and in partnership with Olal’art and the Clémentine De Forton gallery, the exhibition also presents other artists such as Nicolas Lefeuvre, Hélène Le Chatelier and Delphine Courtillot.

You were born in Beijing in 1965 and graduated from Nankai University in Tianjin (1988) and the China Art Academy in Beijing (1992). Tell us about your first steps as an artist?

The first step as an artist in my career took place in the spring of 2009 when I presented my solo exhibition “You and Me” at 798 Art District in Beijing. The show included three ongoing and interrelated projects “You and Me”, “Stay Together” and “Mirrorman”. They were all interactive, participatory, playful, making viewers elated. The gallery was always filled with visitors and overwhelmed with laughter and a joyful atmosphere.

The positive response from viewers, mostly young people, has given me great encouragement to keep doing my art. It was a fantastic start. I had been preparing myself for more than two decades to take the first step, working as several professionals in the artistic community, such as critic, curator, director, dealer, translator, publisher, etc.

Throughout your career, you have explored many elements of traditional Chinese art, especially ink painting. Yet your works are very contemporary and modern. Tell us about the inner strength of the raw elements that you think are at the heart of your works?

It concerns the relationship between media art concepts and traditional ink brush painting materials, such as ink, brush, rice paper and water. The traditional ink painting practitioner cares more about the ink and the brush. From the perspective of modern art, I found that water is a diluent or modifier and the most important medium, which is the only raw material playing the decisive role in the nature of the ink brush. In fact, water is fundamental to life and the ecosystem – many poems and verses extol the charm and symbolic meaning of water in traditional Chinese culture. Landscape ink painting is called mountain and water picture. The central concern of my art is with nature, visualized through the organic patterns of the work.

What kind of materials do you usually work with?

Where do you find inspiration for your work?

I usually find inspiration by observing nature, such as the sun, water, flowers and wood. The unique and artistic building spaces also offer inspirations. From time to time, I have synesthesias after a good meal and good wine; the ensuing intoxication usually reminds me of images, prompting me to create new works.

Art critics have noted analogies in your art with the French artist Pierre Soulages. Would you agree there? Have you visited the Pierre Soulages Museum in Rodez, France?

Although I did not visit the Pierre Soulages museum in Paris, I helped curate his first and only museum-size exhibition at the Beijing National Museum of Art in 1994, while working there as as assistant curator. His exhibited works have been so well received by both art professionals and ordinary visitors. His works also strongly shocked me. I visited the gallery to see his works almost every day. And you wondered how the master of Western art could borrow Eastern calligraphy to bring his works? Another question I had was how Chinese artists combine and fuse elements of Western modern art with traditional aesthetics to create strong modern work to reach a global audience.

What emotions do you hope viewers feel when looking at your works?

I intentionally don’t expect any particular response from viewers as they are very diverse with different cultural backgrounds. I am open to any welcome and comments. My exhibition experience around the world tells me that viewers are always curious about my works, always asking me various questions.

What role does the artist play in society?

I think artists have played different roles throughout history. In contemporary society, the role of an artist is arguably a producer whose output is fresh and new but impractical to keep updating the imagery and idea of ​​art.

The five words that best describe your art?

What can visitors expect from you at FOSSILS DANCE 2022?

They can see how the traditional Chinese ink brush can be showcased in a globalized context, as Singapore has a huge overseas Chinese population and is ethnically diverse. I have been to Singapore three times over the years and am very impressed with its resemblance to New York, but dominated by Chinese and Asians. It is at the crossroads of East and West, at the conjunction of the Northern and Southern hemispheres. Therefore, I am very curious to know the reaction of the local public to my first exhibition.

You are a lecturer in the Chinese painting department of the Sichuan Institute of Fine Arts. What advice can you give to budding young artists?

I am not a lecturer at any official art institute but an independent artist, although I have lectured at many art schools over the decades. I always remind art students that if they want to be an artist, they have to be patient, not rushed. A career in the arts is a lifetime commitment. Enjoy every step of the artistic journey as it will be a happy and meaningful experience.

You live in Beijing. What is your favorite museum in the Chinese capital?

There are many types of museums in Beijing. I had liked different museums at different times in my life. Before I became an artist, about 15 years ago, my favorite museum was the National Museum of Art, where I worked for eight years, from 1988 to 1996. The museum was very open and active at that time, organizing numerous outstanding exhibitions of modern Chinese art. art and renowned art masters such as Gilbert & George, Miro, Tapias and Pierre Soulages. Over the past two decades, I don’t think I can choose a favorite museum in Beijing. I like to visit art museums in the West, like MoMA, Whitney and Dia Beacon in New York.

If you had to name a mentor who inspired you in your life and your journey as an artist, who would it be?

My story with the mentor will be unique. His name is Pan Kongkai, son of Pan Tianshou, one of the most important traditional ink painting masters of the last century. He was president of the Central Academy of Arts in Beijing. I started my doctorate. program at CAFA in 2003 under his direction. He was truly a mentor. Why is it most important to me? Because each of us had a different perspective on the ink painting vision.

After a two-year preparation, I submitted my thesis project on a new look at ink brush painting. A day later, he rejected my draft saying that research on Indian ink brush painting should stick to tradition and westernization would never be accepted! I insisted that the development of ink painting should borrow something new and fresh from contemporary art concepts and global consciousness. We could not reach a compromise after a drastic dispute. Finally, I told him that I would leave the doctorate. program to explore ink art based on my research and theory. I did it very early. Therefore, Professor Pan inspired me to move on to a career as an artist at 46, a turning point in life and the path. He helped me make the right decision at the right time.