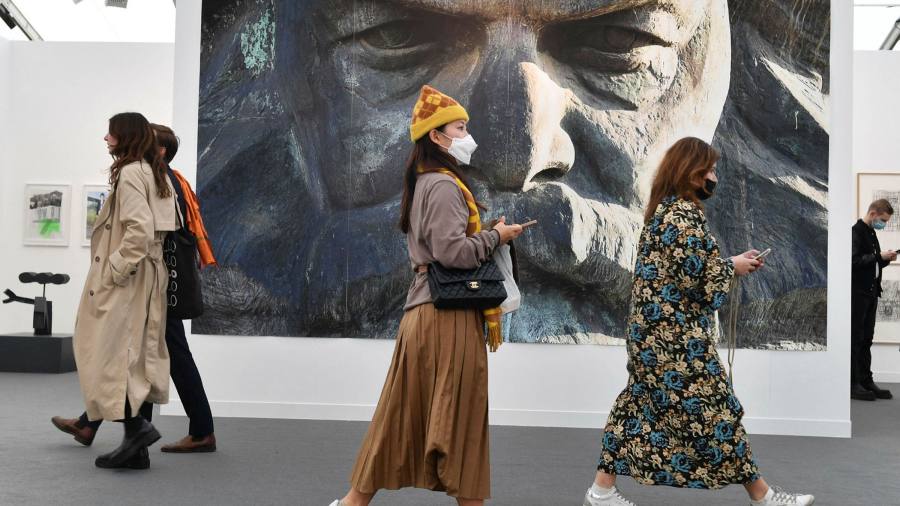 Exhibitors and visitors alike buzzed as the Frieze London and Frieze Masters return to Regent’s Park during the VIP lounge openings on Wednesday. This was largely the same as it was in the pre-pandemic era – the number of exhibitors was similar, the first sales were reported, and the chic, international crowd was in effect, with some even adhering to the compulsory stipulation of the face mask.

However, art has a more conservative, if not dark, vibe this year. â€œWe must weigh the anxieties. No one ever thought that seeing art could change your health in a negative way, but now there are concerns, â€says Mary Sabbatino, Associate at Galerie Lelong. Its booth features Samuel Levi Jones’ â€œDoomâ€ (2021), a canvas of sewn and deconstructed books (sold for $ 36,000).

At Eigen + Art, Martin Gross painted the stand with the capital letters â€œBut not as we know itâ€ and his new oil pastels reflect a more serious era (â‚¬ 3,200 to â‚¬ 9,800). The Gagosian Gallery is the exception to the rule with luminous works by Los Angeles artist Jennifer Guidi. â€œWe wanted to bring a bit of California to the tent,â€ director Stefan Ratibor said. Their plan hit the mark: the nine works sold for $ 350,000 each.

The works of Frieze Masters are reminiscent of riskier times. An installation of 1,514 empty beer bottles in wooden crates (first made in 1962, â‚¬ 200,000) by Dutch conceptual artist Jan Henderikse (b.1937) is the highlight of the show in a shared solo booth by BorzoGallery and The Mayor Gallery. Other highlights include a 6.4cm gilded bronze, zither string weight from the 3rd to 2nd century BC. b1932).

Also among the dishes at Sotheby’s in Hong Kong was “Sophia Facing the Singularities” (2021), an evolving artificial intelligence robot designed by Hanson Robotics, which sold for HK $ 4 million in today’s sale. October 10 (US $ 514,000, HK $ 5 million with fees). The glamorous android tells us in a Sotheby’s video that â€œI dream of a world where AI is not to be fearedâ€, which for me at least had the opposite effect.

After Hong Kong and London, attention then turns to Paris, where the Fiac is hosting its 47th face-to-face edition (October 21-24). During the same week, Christie’s offers two collections of modern and contemporary art, those of the Parisian art publisher Alain Bouret, who died in 2011, and of the Dutch businessman Gerard Valkier, who died the year last (auctions on October 20 and 21). Bouret was friends with many artists from the region during his lifetime and his collection is “very French”, explains Paul Nyzam, principal specialist at Christie’s. The most esteemed work in his collection is â€œPaysageâ€ by Nicolas de StaÃ«l (1952), a gift from the artist’s wife to Bouret (estimated â‚¬ 250,000 to â‚¬ 350,000).

Valkier was more of a â€œEuropean,â€ Nyzam says, collecting in all categories, but mainly in contemporary art for the last 20 years of his life. Its sale at Christie’s includes post-war Italian works of art, notably Lucio Fontana’s chartreuse-green â€œConcetto spaziale, atteseâ€ (1960, estimated between â‚¬ 500,000 and â‚¬ 700,000). Works from simultaneous movements across Germany and Northern Europe also feature, as later, figurative works, including a small painting by Tracey Emin and a sculpture by Antony Gormley. Christie’s specialists admit that such an offer would have been hosted in London just a few years ago, before the impact of Brexit. “We are targeting European buyers, who think in euros and want work in free circulation,” says Nyzam.

Rumors that former Sotheby’s rainmaker Amy Cappellazzo partnered with Yuki Terase, previously responsible for contemporary art in Asia for the same auction house, are turning out to be true. The duo will run an art consulting firm with equal headquarters in New York and Hong Kong with a focus on art as an asset class in a rapidly changing market. Called Art Intelligence Global – or AIG, but not to be confused with the insurance company – they are joined by another former Sotheby’s senior executive, Adam Chinn. He came to the auction house with Cappellazzo in 2016 and helped develop his more sophisticated financial instruments, such as third party guarantees. Chinn remains co-chair of the recently launched machine learning platform, LiveArt, a separate company from AIG.

And finally . . . this is the last chance to see three of four existing textiles woven from the naturally golden silk of millions of orb-weaver spiders, at Oliver Hoare Limited in Cromwell Place in London until October 22. Designed by textile artist Simon Peers and produced with fashion designer Nicholas Godley, the largest lamba fabric on display is made from the silk of over a million spiders, mostly collected in Madagascar (and released in the nature).

The brocaded lamba was last exhibited at the V&A Museum in London in 2012, when nature historian David Attenborough said: â€œIt must surely be considered one of the rarest and most precious fabrics. glamour. Thank goodness the world is still full of wonders. Prices start at Â£ 250,000.