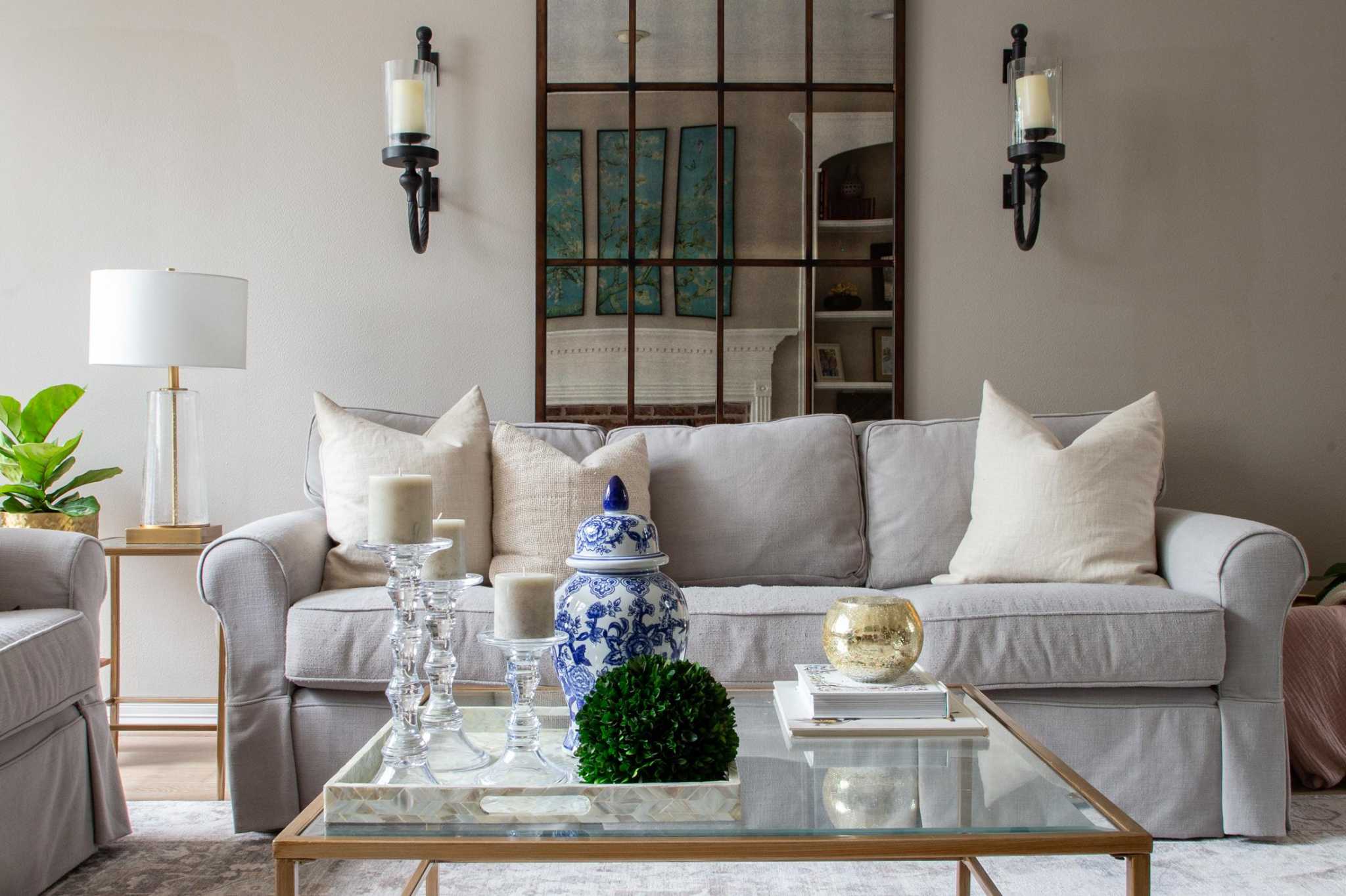 Home improvement shows in Houston, renovations without a demo can have a big impact

Elizabeth Johnson is a CPA turned stay-at-home mom and her husband Chad is an engineer – right-brained people who know what they know and, more importantly, know what they don’t know.

When they returned to the Houston area six years ago, they wanted to be in the woods and found a home that would suit their family. They knew their home wasn’t necessarily stylish or fully functional, but didn’t know how to go about changing it.

So they got excited when they saw an item auctioned off at a charity event: a consultation with interior designer Caron Woolsey from Caron Woolsey Interiors.

Their quick consultation turned into more important work as Woolsey helped the couple with updates and new furnishings and accessories for much of the first floor of their home.

Throughout the pandemic, renovators and interior designers have been busy, a trend that is expected to remain strong throughout the New Year. Everyone seems to want things to be lightened up, brightened up, and made more comfortable.

â€œWe started out small, figuring we were going to change the carpet in the master bedroom and maybe the carpet in the formal dining room,â€ Elizabeth said. â€œIt was in the early days of COVID, and we started talking about everything from the kitchen and a bar, adding hardwood floors. “

The project only took six weeks as it was the start of the pandemic and you could still get furniture and materials quickly.

Elizabeth, soon to be 48, and Chad, 48, agreed some of their furniture should stay, but other changes – paint, hardware, lighting, furnishings and fixtures – could have a big impact, even in small doses. .

Their style is nurtured by their upbringing in a small town – he’s from Elk Mountain, Wyo., And her from a small town north of Kansas City – where nothing has ever been fancy, and everything was practical and functional. A simpler and more subtle farmhouse style was their goal.

The couple, married 16 years, met years ago when they were graduating from college and living in Houston. they then lived in a series of other towns before returning six years ago with their three daughters – Emma, â€‹â€‹now 14; Claire, 10 years old; and Molly, 8.

They painted everything – walls and cabinets – and changed the floors everywhere. Carpet and ceramic tile floors are gone, replaced with wood floors and rugs.

The rugs were a lesson for Chad, who wondered why he should spend money on beautiful floors and then cover them with rugs.

â€œIt seemed like a crazy concept to get rid of a carpet and put wood on it and then put some carpet in it,â€ Chad said, laughing, admitting defeat. “I lost this fight.”

Now he appreciates their form and function. Not only do they add color and texture to a room, but they also help define living spaces and for anyone who walks with bare feet, they make the home a lot more comfortable.

At the front of the Johnson house was a fireplace with a typical oak banister. Realizing the couple’s budget and the scale of the work ahead, Woolsey urged them to paint it – white balusters and a black handrail – a much cheaper alternative to finishing.

The high pile carpet on the stairs has been replaced with carpet with a neutral herringbone pattern. A lantern-style chandelier and a pair of matte black sconces complete the space.

An antique chest of drawers that was already there was accessorized with a blue and white ginger pot, a small lamp and a plant. â€œEvery space needs some chinoiserie, even if it’s just one room and small in size,â€ Woolsey said of the finishing touches.

An office at the front of the house was dark and dreary, with stained-wood fitted wardrobes, brown walls, wood blinds, and 12-inch builder-grade floor tiles.

The home’s new hardwood floor has been extended to this study, and its built-in wardrobes are now painted white and beautifully decorated with things that matter, instead of being filled to the brim with anything and everything.

Once again, they had a rug to fill much of the room, and an old leather chair and ottoman live here as well.

A rustic antique brass light fixture appears to hang neatly in the center of the room, but it has been the subject of much argument.

Originally the room had a ceiling fan, fixtures that men generally love and interior designers usually try to replace. They can be great for creating a breeze on an outdoor porch or pavilion, but they can be an eyesore indoors.

Chad wanted to keep the fan, and Woolsey’s job was to change his mind.

â€œElizabeth really wanted a light for the study, but Chad couldn’t see a reason. I said “what if we could find the most rustic light there is?” and he said he would think about it, â€Woolsey said. “I had to make him a partner in the decisionâ€¦ instead of saying that’s what you need to do and why.”

She finally found a more rustic one with a distressed finish and he agreed.

â€œIt’s rude, and he loved it because it showed craftsmanship,â€ Woolsey said, noting that it worked well with the much-loved chair and ottoman, as well as keepsakes such as a skull and crossbones. animal from the hunting days of Chad and the crown he was playing. to college.

The kitchen update was more aesthetic, with new paint and cabinet hardware, a new sink, and lighting above the island and above the sink. While the peripheral cabinets are white, they opted for Restoration Hardware’s Light Silver Sage, a pale blue-gray, for the island. They replaced the brown stone countertops with white quartz and a butcher’s block top for the island.

In a project full of “savings” and “crazy expenses”, the wooden counter was a major “saving”. Because it wasn’t expensive, the couple knew that if they got bored quickly or didn’t like the way he was holding, they could easily change it later.

You can see the utility room from the kitchen, and its builder-grade tiling and orange-brown countertops were an eyesore. Now it has light gray printed floor tiles which are much more attractive and countertops similar to the kitchen.

Small changes made the master bedroom more livable, replacing a sofa that took up too much space with a small wooden and sisal bench, and adding decorative pillows, artwork, and plants.

Chad hated getting rid of that sofa because it and a few other pieces of furniture had come with the house as sweeteners when they were negotiating the price. Getting rid of them seemed like a crazy move – losing something he had worked hard to get it for.

Woolsey felt like the spacious room was very bright, but you couldn’t appreciate any of them as the couch ate so much space and was never really used.

A few novelties in the dining room have refreshed a space that anyone entering through the front door sees. They already had a white dresser and table, so Woolsey brought in new chairs and a light fixture, mixing black and white with natural fibers, just like they did in the kitchen.

A pair of upholstered hostess chairs mix with four black painted wooden chairs and two other chairs which are a combination of black metal frames with wooden seating. The chandelier has a matte black cage with natural fiber wrapped around its stems.

The Johnsons are the first to admit that if they had to choose chairs for themselves, the eight would match up exactly.

But Woolsey wanted to achieve the farmhouse look they preferred, delivered in more subtle ways, like the relaxed mix of black and white and touches of natural fibers.

In the formal living room, the Johnsons had sofas they loved, so Woolsey finished the room with everything else, a rug, tables and accessories including a mirror, lamp and sconces.

In Woolsey’s initial presentation to the couple, she suggested big changes to the powder-coated bathroom, a boring box with brown walls and an ugly light.

Knowing that the couple were more than a little scared of the color, she suggested adding white panels to the lower part of the walls and installing Thibaut’s Honshu animated wallpaper (in the Robin’s Egg colourway) shown below. above. A new pedestal sink with a country-style faucet, a pretty mirror and a two-globe light fixture complete the room in a small setting.

When Woolsey first mentioned the wallpaper to the Johnsons, they had a ‘deer in the headlights’ expression, she said. She assured them that it would not be old-fashioned wallpaper and that its color and pattern would be offset by the panels.

â€œWe’re pretty dumb. I’m an engineer and she’s an accountant, but we love our house now, â€Chad said. â€œWe can let the kids and the dog run around without feeling like they’re going to ruin everything. It’s amazing to walk through the house and think it’s ours.

Their daughters also love the changes and urge their parents to start upgrades to the second floor, where their bedrooms are located. Claire’s 11th birthday is approaching and she has already requested a new paint color and new bedding.

â€œI like to sit in the house now,â€ Elizabeth said. “It’s so pretty, and I love it – instead of just sitting there thinking I should change it.”

Forget the cat-walk, the doggies put their best paws forward

14 unique restaurants to try in Lancaster