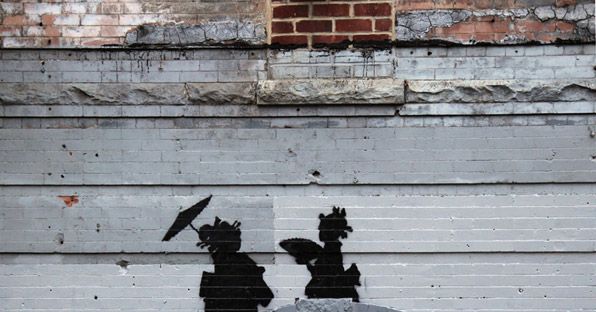 Our month-long snorefest is over. Self-promoting British man and graffiti artist Batman Banksy has concluded his “New York residency” from a job a day. Say goodbye to the crowds of tourists running from paint to paint to take selfies; easy â€œart worldâ€ fodder for tabloids and local television crews; to obvious insolence, breathtaking pictorial banality, and offhand political commentary painted on the walls of New York City. Never mind the fact that Banksy’s fanboys and fangirls have passed at least a dozen top street art pieces every time they’ve rushed to see one of his paintings – no other graffiti artist has remote PR machine like Banksy’s. You can almost hear him laughing all the way to the bank. As for his works, some have already been removed and the owners are probably collecting sums in five and six figures. Good for them. Those works that remain, without the spotlight of exaggerated publicity, now look as mundane, generic, and boring as they really are.

But I’ve been asked to rank all of the Banksy plays that have appeared in New York this month. Hmmm. I mean, what about a shadow painting of a dog peeing on a wall? I have no problem with graffiti. And Banksy, like many British artists, is particularly good at creating scenes and generating buzz. He’s just surprisingly unoriginal in terms of his actual work. However, I am an art critic and all artists have their own curve to assess. Believe it or not, I actually love a few of his efforts. Which, come to think of it, isn’t that bad for an artist, especially an artist as sparkling and predictable as Banksy.

So here they are ranked from worst (appalling) to best (fair):

29. New-York Times opinion submission (October 27): It’s not a painting, but it’s an integral part of Banksy’s New York project. The Times rightly rejected that stupid editorial rant and holier than you by British artist on the new World Trade Center building. Tellingly, all the things he thinks about structure apply perfectly to him: compromise, vanilla, selfless, mediocre, etc. Banksy, bird brain, nobody likes this building! The old towers didn’t have much to say either. But it’s a miracle that this one was built after what New York has been through. It’s New York, Banksy. We make large buildings. We want a high rise building. Just there. Right now. When you write that this building “clearly proclaims that terrorists have won” and “New York’s glory days are over”, we are all terribly sorry that New York City does not meet your high standards. Take your millions and fuck you, shit.

28. An eponymous play by Banksy (October 31): The Perfect Metaphor: A Brand Building Billboard, What Else? Banksy. Like always.

27. Ronald McDonald shines his shoes (October 16): A sculpture of Ronald McDonald getting his clown shoe waxed by an actor dressed as a Dickensian boy? The proof of Banksy’s subconscious obviousness is in the pudding.

26. concrete confessional (12 October): I will give you everything I have, if you promise not to come back to New York.

25. Young graffiti artist with a butler (October 21): Ridiculous. Nerdy. Distraught. Almost every graffiti artist I spoke with hated Banksy. They hated this one the most.

23. Grim Reaper in a bumper car (October 25): Boring and pathetic bumper cars, English merry-go-rounds by the sea. On the Bowery. With ghosts. Grow a pair, Banksy!

22. A leopard (October 30): He sits on a wall in front of Yankee Stadium. Painted the same day the fucking Boston Red Soxes win the World Series? WTF! Quite brainless and lame.

21. A graffiti robot (October 28): Nostalgia for ’60s television. This guy’s out of ideas. He can’t even keep it for a full month! Is he the people’s graffiti hero? Truly? Folks, you taste much, much better than that.

20. A saying about being cranky (October 26): Wake me up when this truck leaves the road.

19. Favorite at the strip club (October 24): A desperate man waiting to give flowers to someone outside the Hustler Club? So, so deep. So, so obvious.

18. A balloon (October 7): A red balloon floating freely? â€œSo smart, so classless and free. As far as I know, you’re still a fucking peasant.

17. “The musical” (October 4): The stencil of “The Musical” under a pre-existing street painting shows Banksy’s pre-existing condition of being terminally ill. It was only the fourth Banksy, and it’s like he’s already sold out.

16. Fire hydrant and dog (October 3): A dog peeing on a fire hydrant is the best thing you have? Did you cross an ocean for this?

15. Gladiator quote (October 14): I love this line from the movie Gladiator. But not the timid erasure of the word “Eternity”. We. To have. This.

14. Two children and an anti-graffiti sign (October 1): The English nostalgia for street urchins and New York Bowery children of the early 20th century? What century does this failure live in? The “Graffiti is a crime” sign is a silly, larf-larf nod. But nice use of the wall and on a real scale. So not a total flop.

13. Banksys for sale (October 13): People loved that they were punks, and that it was some kind of edgy commentary on genuineness and greed. Like leaving winning lottery tickets on the street.

11. Horses on a wall and car (October 9): Looks like graffiti from the East Village scrapyard from the 1980s. Nothing more.

10. A saying on a door (October 8): I like that the workers of this Greenpoint factory cover the Banksy so that they can continue their work without the tourists. Perfect that a yuppie offered them a thousand dollars for the door, on the spot, then turned to a camera and said, “I could sell this for $ 400,000.”

9. A mobile garden in a truck (October 5): A truck with a landscape similar to Thomas Kinkaid’s is good, I guess.

8. A kid with a hammer (October 20): Nice use of a found object fire hydrant.

7. A contemplative Nazi (October 29): They say it’s always a sign you’ve lost an argument if you bring up the Nazis. So I give you this waving one-liner. In one of the oldest tricks of the Modernist book, Mr. Meh adds to a thrift store painting. I saw a thousand pieces exactly like this. With the Nazis, the politicians, the poets, Stalin, Mao, the bad guys, the outlaws, the pin-ups, whatever you want. But since it’s up for auction and the money is donated to Housing Works, I’m going to shift it up a bit. Happy, in love with Banksy?

5. Flowered twin towers (October 15): This one looks exactly like a sculpture from the 90s by artist Gabriel Orozco. But it’s poignant – and that of Banksy which belongs to the Museum of the City of New York.

4. Geishas (October 17): As with the Orozco riff of October 15, he’s a parrot from an artist far greater than Banksy: Kara Walker.

3. Faces in the crowd (October 18): Maybe this one is good because there isn’t a lot of Banksy in it – it’s a collaboration with senior Brazilian twins Os GÃªmeos.

2. Sphinx (October 22): My second favorite Banksy looks exactly like the work of top artist Huma Bhabha. Note that this is not a painting.

1. Animals in a truck (October 11): Surprise, pathetic and humor. A mysterious glimpse of something. Interestingly, this Banksy is also not painted. Stick with the sculpture, man.