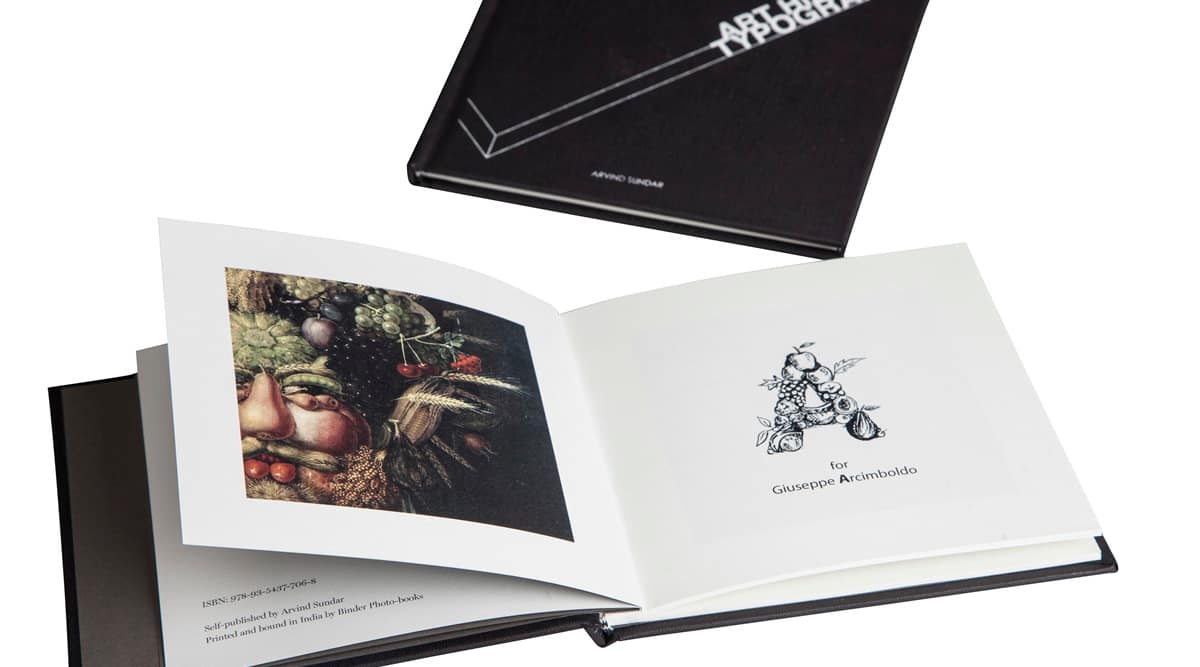 The annual Internet Challenge, 36 Days of Type, finds new iterations each year as a global community of designers and artists discover innovative ways to showcase the English alphabet and numbers. Where some turn to food items, cartoon characters and quilling paper to create the alphabet, for Chennai-based Arvind Sundar, 28, is art history.

In early 2020, Sundar created a mix of art history and typography for 36 Days of Type. The alphabet takes the signature styles of famous artists from the 14th to the 21st century, mainly from Europe and America. The letter A takes the form of the portraits of Giuseppe Arcimboldo, for example. Arcimboldo, a 16th-century Milanese painter, was himself a master of mash-ups, painting human heads as assemblages of fruits, flowers and vegetables. A pear stands out in the nose and onions in red cheeks. In Sundar’s series, the typeface for the letter A pays homage to Arcimboldo, and is made entirely of fruit.

The artists selected in this art history primer were based on Sundar’s personal favorites – he calls Pollock and Marin his polestars – and because their last names match the alphabet.

The ink series is now available as a book, titled Typography of art history (Rs 2,400, available at http://www.floatingcanvas.co). It is formatted like a children’s book, with the alphabet on one side and the representative object on the other, such as A for Apple or P for Pot. Here, A is Arcimboldo and P is Jackson Pollock, with selections of their art presented as objects.

Sundar says he chose this format because he sees it not only as a table book but also as an educational tool, as â€œa door to the history of artâ€. Sundar graduated with a Masters of Fine Arts from the University of Cincinnati in 2018, and is a painter and designer with a keen interest in geometry, calligraphy, and typography. Having taught at Loyola College in Chennai for a few years, he says: â€œI don’t see any formal art education in India, especially when it comes to art history. In the United States, I’ve seen kindergarten teachers take kids to art museums. We don’t have it here. I wanted to generate some interest in adults and children. He cites the example of the letter U for Paolo Uccello, and hopes his audience will be compelled to learn more about one of the first painters of the Italian Renaissance, known for his obsession with perspective.

Sundar says he chose this format because he sees it not only as a table book but also as an educational tool, as â€œa door to the history of artâ€.

The book includes other great artists, such as Georgia O’Keeffe, Frida Kahlo, Andy Warhol and Salvador Dali. Sundar’s typographical interpretations present the legacy of these artists in a nutshell. Some, like M for Agnes Martin, the American abstractist of the twentieth century, are particularly innovative. Sundar says, â€œWith Agnes Martin, it was the gates. As a painter, I am largely inspired by grids. I wanted to have a strong influence on the grid in the book and that’s why I chose Martin.

The artists selected in this art history primer were based on Sundar’s personal favorites – he calls Pollock and Marin his polestars – and because their last names match the alphabet. If the public is looking for an edition showcasing Indian art history, they won’t be disappointed to learn that Sundar has one in the works.

What is behind the immersive exhibits sweeping the country