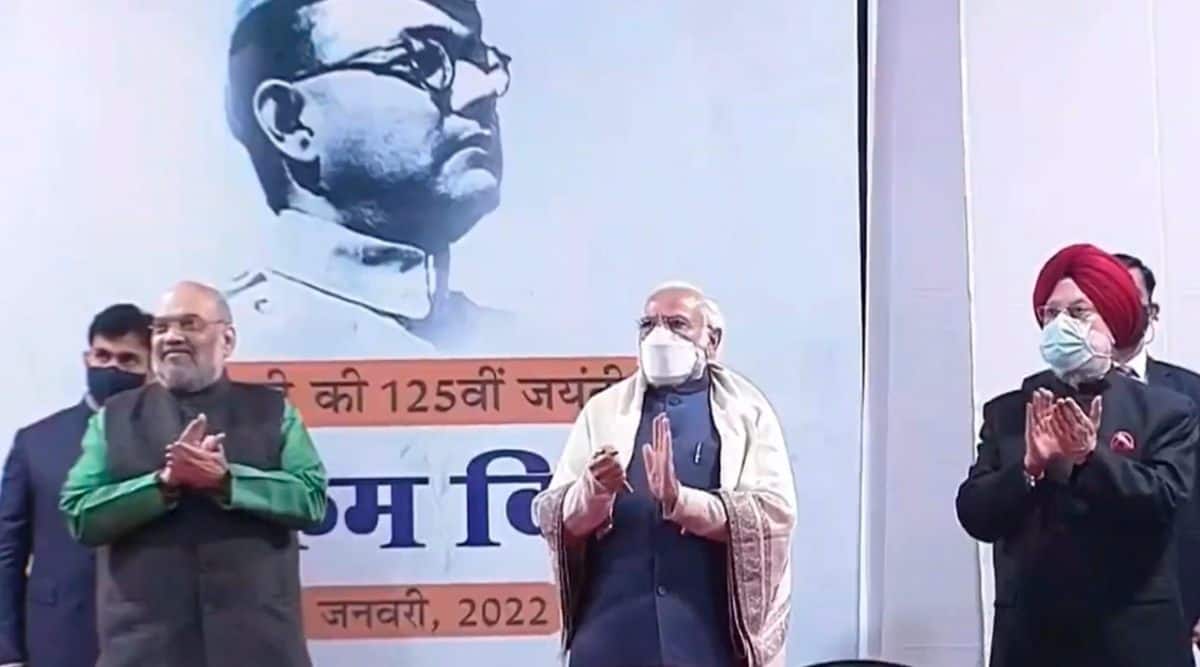 PRIME MINISTER Narendra Modi on Sunday unveiled a hologram statue of Netaji Subhas Chandra Bose at India Gate and said the country is correcting ‘mistakes’ made after independence as he says efforts have been made to erase the contribution of “several great personalities” with the nation’s heritage and culture.

The Prime Minister’s remarks were echoed by Union Home Minister Amit Shah, who also referred to the event as “an attempt to obliterate” several prominent figures in the struggle for freedom.

“It is regrettable that after independence, efforts were made to erase the contribution of several great personalities, as well as the culture and heritage of the country. The struggle for freedom involved the penance of thousands of people, but there was an attempt to limit their history But today, after decades of independence, the country is boldly correcting these mistakes.

In this context, Modi said, “Today, the country is developing five pilgrimage sites (panch theerth) associated with Baba Saheb Bhimrao Ambedkar. The Statue of Unity has become a pilgrimage to the glory of Sardar Vallabhbhai Patel. We named an island in Andaman after Netaji. A memorial is also dedicated to his name. It is a tribute not only to Netaji but also to the Indian National Army (INA) jawans.

He also referred to Janjatiya Gaurav Divas in honor of tribal icon Birsa Munda, and the construction of tribal museums across the country to mark the contribution of the community. He said it was the great resolution of Azadi Ke Amrit Mahotsav – 75th anniversary of independence celebrations – for India to revive its identity and inspirations.

Hailing Netaji’s role in the freedom struggle, Modi described him as the person who established the first independent government on Indian soil – a reference to the Azad Hind government which was formed in October 1943 in Singapore, and which then exercised jurisdiction over the Andaman and Nicobar Islands. .

“Netaji Subhas Chandra Bose gave India the confidence to become an independent and prosperous country. With great pride, self-confidence and courage, he told the British people that I would not take independence as a alms, I will get it. He was the one who established the first independent government on Indian soil. The splendid statue of our Netaji, in digital form, is being established near the India Gate Very soon, in place of this digital statue, there will be a huge granite statue,” Modi said.

Sunday’s event marked the culmination of year-long celebrations of the 125th anniversary of Netaji’s birth, as well as the official start of the 75th Republic Day celebrations. At 6:35 p.m., the Prime Minister pressed a button on the remote control and the holographic statue of Netaji came to life within seconds, accompanied by the signature tune associated with his INA, “kadam kadam badhaye ja”. .

Elaborating on the government’s efforts to honor Netaji, Modi said, “I had the great good fortune to visit Netaji’s paternal home in Kolkata last year. And the experience I had cannot be expressed in words.

The Prime Minister said he also cannot forget the day of October 21, 2018, which marks 75 years since the formation of the government of Azad Hind. “In 2018, I wore an INA cap and unfurled the national flag at Fort Rouge. We are also working on an INA memorial at Fort Rouge. It is also fortunate for our government that we had the opportunity to make Netaji-related records public,” he said.

It was on Friday that the Prime Minister announced that a ‘large statue’ of Netaji would be installed under the canopy of India Gate, which had been empty since 1968 when the statue of King George V was removed . The announcement came amid a political row over the government’s decision to extinguish the Amar Jawan Jyoti, the flame burning for five decades at India’s Gate in honor of soldiers who died for the country , after merging it with the National War Memorial flame. near.

Culture ministry officials said Netaji’s hologram would be in place, powered by a 30,000 lumen 4K projector, until the granite statue was completed. They said a “90% transparent” holographic screen has been erected in such a way that it is not visible to visitors.

“The size of the hologram statue is 28×6 feet, the same as the current granite statue, and it will continue to be beamed from sunset to sunrise every day until the actual statue arrives,” said an official. The graphic model for the statue was designed by a team from the National Gallery of Modern Art, under the guidance of its managing director Adwaita Gadanayak, while the sculptor is being shortlisted.

Several steps have been taken by the government to honor Netaji’s legacy, including celebrating his birthday as Parakram Diwas every year and starting Republic Day celebrations a day earlier this year – from of January 23.

Speaking at Sunday’s event, Home Minister Shah said: “It will not be just a granite statue, but an expression of the feelings the nation has for Netaji. There has been an attempt to obliterate many of these personalities who fought for India’s freedom. But today, with the decision to install the Netaji statue here, the nation feels satisfied and excited.

The event was attended by Union ministers, including Hardeep Puri and Meenakshi Lekhi, administrators of the INA, and officials from the National Disaster Management Authority (NDMA) and the Coast Guard.

Modi said during his speech that before, the attitude towards disaster management was to dig a well when you are thirsty.

“But in 2001, after the earthquake in Gujarat, the country was forced to rethink. This has changed the meaning of disaster management. At that time, the Gujarat State Disaster Management Act was enacted. Gujarat was the first state to enact such a law. Later, the Union government, after taking inspiration from Gujarat law, enacted a disaster management law for the whole country in 2005… It was this law that helped the country during the Covid pandemic,” he said.

[COLUMN] Achieve freedom by getting rid of your mountain of debt —

Dying art form gets US funding