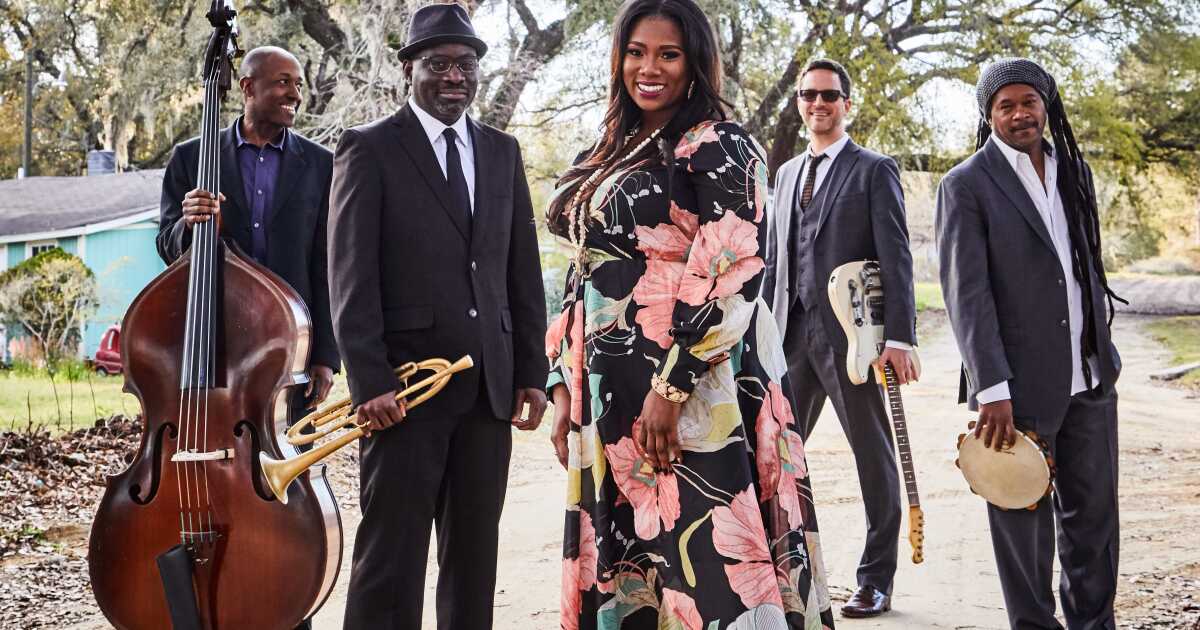 Music from a band based in South Carolina Tidy tank top is informed by hundreds of years of history.

Its sound is rooted in the Gullah culture of the Southeastern United States – descendants of slaves whose African rhythms laid the foundation for music and devotional songs for work and play.

Drummer Quentin E. Baxter learned the rhythms at the heart of Gullah music as he grew up playing percussion in churches around Charleston, SC.

Jeremy D. Goodwin: How did your education in the black church influence your music?

Quentin Baxter: All the rhythms that I play, basically, throughout shows, are rhythms that I learned from my parents or that we adapted based on how someone phrased or danced in church.

So I have rhythms that are steeped in tradition, based on how someone stomped on the ground as they shouted in church. The substrate of the Gullah rhythm is also known as the stick rhythm, where you had a mother or a deacon from the church and they had this big stick and they were just knocking on the ground. This rhythm is the driving force behind it all.

All arrangements come from starting as authentic as possible and seeing how far we can go. This always allows other elements to enter. We have a lot of songs that we’ve written as a band, and not just arrangements of old songs. But the sentiment of the songs, the message in the songs, resonates with the community. We’re not really trying to come out like we have a license to do whatever we want. We have a license to continue to respect the culture.

Goodwin: I think a big part of the reason people who are not from the Guillah culture are exposed to this music comes from the extraordinary efforts of Bessie jones and the singers of Georgia Sea Island, who recorded much of this material over 50 years ago.

Baxter: Well, you are exposed to the word “Gullah” because of it.

You are exposed to feeling and rhythms because this music, this style of play, this rhythmic driving force, has been the informant of just about every style of American music. When you hear jazz, when you hear blues, when you hear Motown, you hear this heritage of that music.

Goodwin: When I listen to your adaptation of “You are better in spirit“, you and trumpeter Charleton Singleton put a lot of New Orleans in there, don’t you?

Baxter: Well, that’s because you probably heard it as a New Orleans inflection first, right?

Goodwin: To hear what you do on the drums, it sounds like it has a place in second line music.

This Creole is the purest African assessment of the colonial – you know, what it is. So there is not much French or Spanish influence in our trance.

Everything is changing. And I think what’s important and really significant about this presentation with Ranky Tanky and Dom Flemons is that you’re going to get this very stripped down, raw Dom Flemons version of this evolution of music we’re talking about.

It’s so important to know that music always has a direction, but it comes from somewhere.

Goodwin: What is the spirit of animation that links the traditional work that you adapt and your original pieces?

The feeling is love. The feeling is respect. Humanity from man to man. It’s a big part of the values â€‹â€‹you learn in church, or whatever moral institution you align yourself with. It is an offering. It is a tradition of humility.

This culture is really about love. It is to give. And forgive. Compassion.

There is a lack of songs that are really all about compassion. And fun, and fun. Without becoming a moral preaching band, we are a band singing songs that people want to hear because sometimes you just want to hear a good message. Especially now.