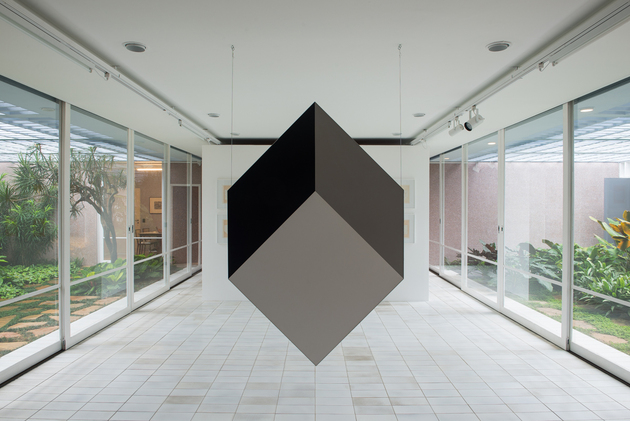 Certain moments in the history of art are formed by institutional processes of recovery of singular subjects which can come to define a whole generation of artists or even the cultural production of a territory. In the Brazilian case, Helio Oiticica and Ligya Clark illustrate this phenomenon, because they have been widely used since the end of the 90s as â€œpillarsâ€ to reflect on a large part of contemporary Brazilian artistic productions. However, the same matrix that supports the work of these artists has also been shared by many others, generating several experiments that today deserve to be revisited. The old separation between a â€œhard edgeâ€ concretism of SÃ£o Paulo and a more â€œcounter-cultural and organicâ€ (neo) concretism of Rio de Janeiro may no longer have the determining force as a boundary between the opposing branches of art in Brazil. Rather, they can be understood as specific and complementary elements of a dynamic of modernization, each linked to its own places and times of emergence, as kinds of responses and echoes to what throbbed as cultural and also social needs. It is in this perspective that the new exhibition centered on the work of Geraldo de Barros (Chavantes, 1923 – SÃ£o Paulo, 1998) can hold our attention.

Entitled â€œGeraldo Industrialâ€ and created for the Luciana Brito Gallery by the artists Fabiana and Lenora de Barros (daughters of Geraldo), the exhibition provides a small panorama of the production of this prolific and controversial artist. It is also the first time, since the change of headquarters of the Luciana Brito gallery, that a single artist has occupied all of the gallery’s new exhibition spaces, now located in a recovered Modernist house designed by the remarkable architect. Rivo Levi.

Presenting emblematic works, paintings and preparatory drawings linked to a series produced in the 1980s (part of which is part of the Inhotim collection), the exhibition presents a vision of a practice that has transited between painting, photography and design, highlighting the multifaceted character of the artist, who was one of the precursors of Concrete Art in Brazil. In some of the gallery’s exhibition spaces, we can also see reconstructions of rooms with furniture designed by the artist, dating back to his years of work in front of the factories of Unilabor (1954-1961) and HObJEto (1964- 1989). Particularly interesting, Unilabor is a first unique experience in the Bauhaus style: from 1954 to 1961, he founded with a Dominican priest the â€œUnilabor communityâ€, describing a cooperative and community experience of modern production. Unilabor was one of the first brands of modern furniture design in SÃ£o Paulo and its social efforts have also become well known. Another important feature of the show is a timeline in which one can follow the developments of the artist’s career as well as to relate his various productions to each other and with other external episodes of his practice. This timeline could have been set up somewhere else in the show, as it seems a very important part (if not a key narrative element) in understanding Barros’ historical implications within local cultural businesses.

In this sense, it seems important to underline that Barros’ artistic trajectory is also intimately linked to the very process of modernization of Brazilian art. At the age of twenty-six, he participated in the creation of the laboratory and photography course at the SÃ£o Paulo Art Museum (MASP), where he presented the personal exhibition â€œFotoformasâ€ (1950). Thanks to this contact with MASP and with its director, Pietro Maria Bardi, Geraldo obtained a scholarship and left in 1951 to study with Max Bill at the HfG – Hoschule fÃ¼r Gestaltung (School of forms) in Ulm, Germany. Upon his return, Barros became a key figure in SÃ£o Paulo’s avant-garde artistic movements, as one of the founders of the groups Ruptura (1952) and Rex (1966), two radical collective experiences that challenged the status quo. quo because they also defined various transformations in the field of art, which were both essential and influential on the movements that would allow the emergence of a next generation of artistic experiences, such as those of Oiticica and Clark. Geraldo was also a widely recognized artist during his lifetime, having participated in the I, II, IX, XV and XXI Biennials of SÃ£o Paulo and the Venice Biennale in 1986. His works are included in several collections, such as Ludwig Museum , Max Bill Foundation, Museum of Contemporary Art of SÃ£o Paulo, Museum of Art of SÃ£o Paulo, Museum of Modern Art of SÃ£o Paulo and MoMA, New York.

Alongside other concrete artists, turned towards experimentalism (such as Waldemar Cordeiro), Barros sought the articulation of art in critical and inventive socio-cultural processes in the face of technological but also social evolutions of his time.

Attaching art to everyday life, whether through the design or the use of non-artistic and industrial production processes (for example in the making of “formic-paintings” which may refer to Moholy’s early “paintings on the telephone” Nagy), or in his experiments and photographic montages in black and white, Geraldo has filled the modern momentum of socializing art forms, in elements that are both sensitive and functional. In addition to providing an introduction to the artist’s wider trajectory, the â€œGeraldo Industrialâ€ exhibition reminds us of the potential of art to unfold in the most diverse contexts, fulfilling various functions, whether they are productive, sensitive or radical.

Artistic works inspired by the Great Famine struggle to do it justice, but they keep the memory alive