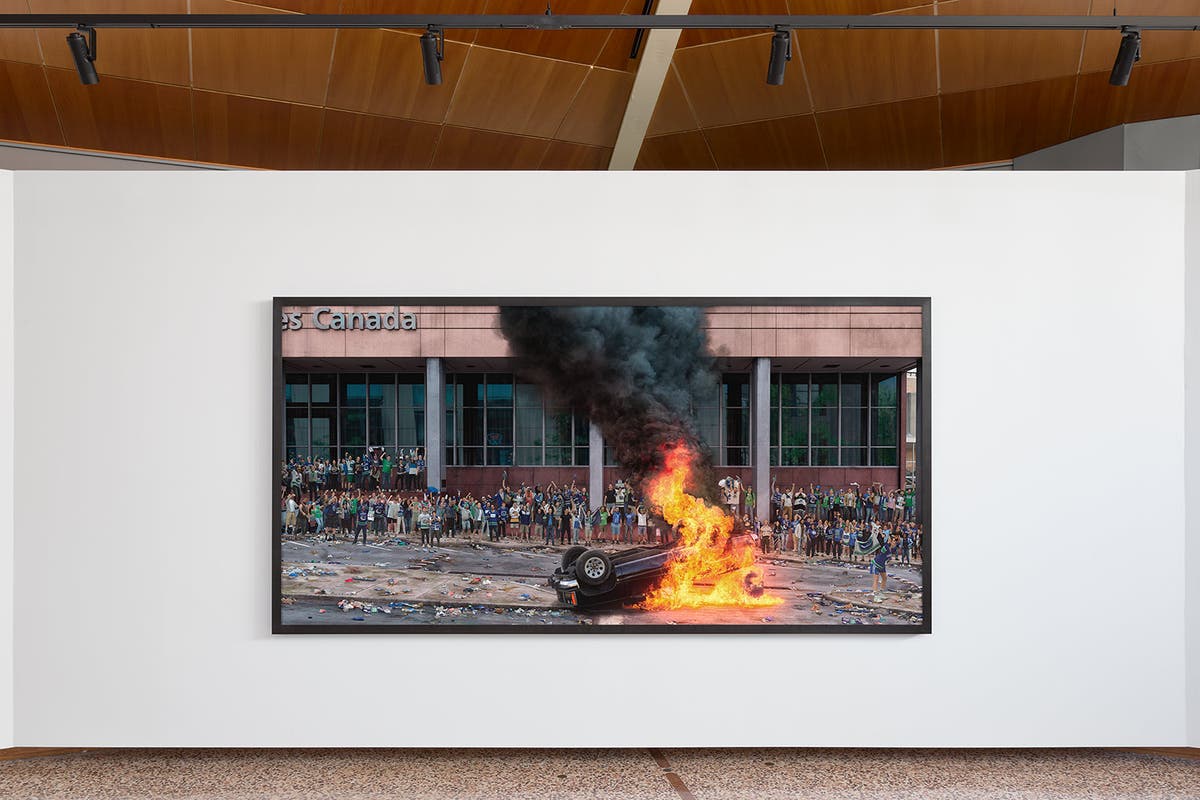 It seems a bit incongruous at first glance. Why do two London grime artists – not to mention two Egyptian rappers – appear in a work by a 62-year-old Canadian artist at the Venice Biennale?

Douglas’ much-admired new two-part installation at the festival (he represents Canada) continues the interests the artist has pursued throughout his career. 2011 ≠ 1848, as its name suggests, is a richly layered collection of works, filled with ideas in the dizzying way that contemporary art so often is, but inspired by the 10th anniversary of protests and seemingly unrelated but almost simultaneous unrest that erupted across the world in 2011, including the London riots and the music that began to emerge there around this time.

The first part of his exhibition, in the Canadian pavilion of the Giardini della Biennale, includes four large-scale photographs that reconstruct the protests and riots of that year from four different locations – Tunis, January to the start of the Arab Spring , the aftermath of the Stanley Cup riot in Vancouver in June, clashes between youths and police in Hackney in August, and the unrest of Occupy Wall Street protesters on the Brooklyn Bridge in October.

In the second, two giant screens suspended in one of the vast salt warehouses in the city’s waterfront Dorsoduro district depict what appears to be a call and response between two duos: London rappers TrueMendous and Lady Sanity (both from Birmingham) and two male MCs from Cairo, El Joker and Raptor.

Protest and music as a form of cultural protest or expression of political and social frustration have long been an area of ​​fascination for Douglas – and this particular type of expression, he tells me, “manifests itself in grime, to a large extent”. The grime began to appear, he says, just before the events of 2011, which he said were a manifestation of a “widespread intuition that something is wrong”.

“Discontent is represented by these actions,” he argues. Without even necessarily the rioters really knowing it, these were acts of protest, he thinks. The title of the book, 2011 ≠ 1848, links these widespread actions to those of the year 1848, in which upheavals occurred across Europe with the middle and working classes rallying against the lack of democratic freedoms, restrictions on the press and continued domination by the aristocratic elite – similar to 2011, but limited to one continent due to the then limits of global information exchange.

Events like those of 2011, particularly those in London which had little or no clear purpose for all but a few of the perpetrators, “are generally treated as police events, watched and forgotten. In the UK, for example, they would say “they’re just looters and hooligans, they just want to have flat screen TVs”. But I mean, it was only a few months after college tuition was tripled. Community centers have been closed, [there was] ongoing austerity, which has had massive effects on young people.

Young Londoners were “already on the streets because they had nowhere to go,” he said. “And then after the murder of Mark Duggan, which caused the fire at Tottenham police station, what happened in the days that followed, in the boroughs of London and across the UK, was clearly something else.”

He just wants to “present these things as not just hooliganism, not just rioting, but an expression of political discontent, even if there is no real agenda or solution.” He concedes it’s not the kind of focused political protest like that of Occupy Wall Street, but thinks it’s not just indiscriminate violence; it’s something more ambiguous, in the middle. “I kind of wanted to posit that you don’t behave like that if you’re satisfied with your life.”

Grime, then, was a related development, he thinks – another response to that general, nebulous sense of discontent. What he wanted to do with this project was to find out if his intuition – that another equivalent form must have arisen independently at the same time elsewhere, more precisely in North Africa – was correct. After much research, he found it.

“Grime uses a local idiom, which is dubstep, as a base – something quite specific to London,” he says. “I found a number of artists who were carbon copying American rap like in Palestine or Tunisia, but when I came across the scene in Cairo, he was clearly using a local idiom combined with all that.” Mahraganat, as it’s called, and grime often share a similar timbre, he explains, because the producers of both scenes use the same free or pirated software and similar samples found on the Internet. He had his equivalent – so he and his team found and auditioned a number of rappers, and found this couple.

The result is quite exciting. I spent a lot more time there getting swept up in their apparent interaction than I expected, and I’m rarely equipped with the patience to sit through a lot of video art.

As with all of Douglas’ work, however, none of this is real, or at least not much. The photographs are based on extensive research, but are fully reconstructed, out of necessity. TrueMendos and Lady Sanity, El Joker and Raptor are, yes, all promising rappers in their respective scenes; nothing is scripted, their flows are real. But the call and response didn’t happen, they didn’t hear each other’s work, Douglas had requested in advance that they “produce lyrics on the subject of the politics of life everyday, like encounters with authority, encounters with the police, you know, everyday sexual politics” and the music you hear them rapping to was added later.

“One of the beauties of rap is that it has no melody, so these a cappellas can play over anything,” Douglas says. This elaborate construct — underpinned by a backstory that these two duos have identified a common ground in and set up two impromptu sessions to work together — is just that: a construct.

Douglas is interested in how our perceptions of information are altered by the way it is presented. It’s perhaps significant that nowhere in the show’s documentation are you ever told the names of the rappers – it’s hard to tell if this is an oversight or a deliberate attempt not to. let reality get in the way of the weaving of Douglas’ narrative. Anyway, it works. It’s convincing, and it makes you think he’s right.

Are we into more of this sort of thing now, I ask him? The capture of the Capitol figures prominently in recent history, a rise of explicit nationalism in the US, parts of Europe and the UK since Brexit, the anger and frustration expressed by the Black movement Lives Matter all suggest it, from all sides of the political prism.

“It’s hard to predict,” he said cautiously. “Things are going to get weird, I think, at the moment.” He cites the trucker protests in Canada, in which protesters used hundreds of trucks to blockade downtown Ottowa for two days. It had started as a call for an end to cross-border Covid-19 mandates but turned into an anti-Trudeau protest.

“95% of truck drivers are vaccinated in Canada,” says Douglas. “And the truckers union was against those protests. So really, it was about something else. Many of these people who were there were part of this network of right-wing organizations that were there more opposed to any form of state control. Many were from the United States, many were from outside [Canada].”

He tells me about “this weird crew called the Diagonalists. These guys want to create a white nation state that stretches from Alaska, diagonally across North America to Florida.

What? “These people are kind of infiltrated and very involved in this, it’s not like a normal, spontaneous grassroots movement, there’s something else going on. So it’s hard to say where it’s going to be taken.

Stan Douglas: 2011 ≠ 1848 is at the Canada Pavilion, Giardini, and Magazzini del Sale No. 5, Dorsoduro. The Venice Biennale runs until November 27 labiennale.org

The MAP Academy Encyclopedia brings together 10,000 years of Indian art history in one place