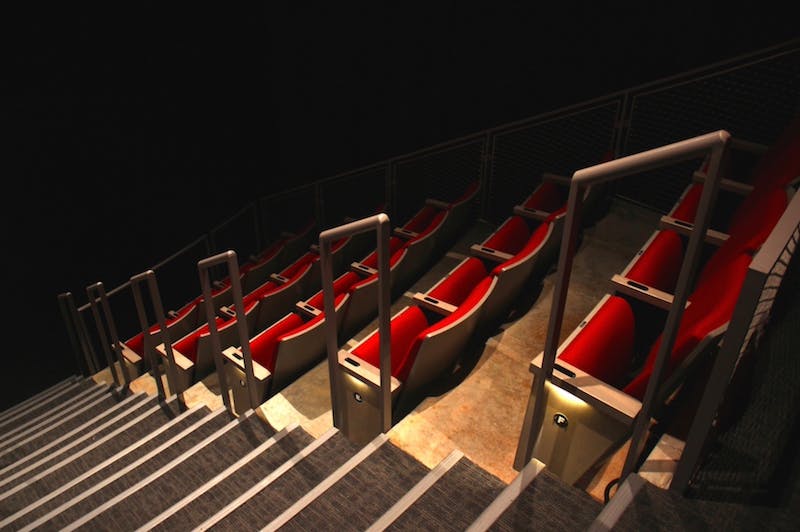 The Ruth Caplin Theater was buzzing with student filmmakers, collaborators and supporters on Monday night as attendees of the Overcranked premiere settled into a semicircle of seats wrapped around an empty push stage. A blank projection screen hung from the ceiling in its center. There was a brief intro, a minute of breathless applause, then the lights went out and the screen lit up with the first short film of the night.

Overworked is a two-semester program within the University’s Drama Department that supports student filmmakers in writing and directing original short films. The program is led by playwright, associate professor and acting theater director Doug Grissom and Oscar-winning independent filmmaker Paul Wagner, who teach screenwriting and directing, respectively. Students write, shoot and edit their films throughout the year and share their work at Overcranked’s annual premiere – this year 11 shorts were screened.

“It’s really a great variety, with comedy and more serious subject matter, and with different styles,” Grissom said. “Some are realistic and some are more stylized and expressionistic.”

Each film represented the culmination of the efforts of student Overcranked as a writer-director combined with the efforts of a producer and an entire cast and crew of collaborators. The first offered the opportunity for these collaborators to come together and share the excitement of their achievement.

“Film is totally a collaborative art,” Wagner said. He further emphasized the key role of an audience in shaping the experience of students in the program. “[The premiere] is at the heart of the course… It’s a really powerful message to send after a year of narrowly focusing on what they wanted to say and do, to realize, wow, that’s where the audience can react.

This year’s in-person premiere is the program’s first since 2019 due to the COVID-19 pandemic, and it was clear that the community nature of the experience could not have been replicated digitally – the sharing of space with other members of the public created a palpable response to the work. Viewers reacted vocally with laughter, gasps and expressions of affection.

The house lights came on at the end of each film, and Wagner greeted the cast, crew, and creative team to thunderous applause.

The premiere of Overcranked was a thrilling display of the immense talents of the University’s student filmmakers. The event demonstrated the vital need for these community experiences within the arts, offered collaborators the opportunity to share mutual appreciation, and showcased the hard work of Overcranked students to an enthusiastic audience.

the assistants speak to power; artists respond to the canon