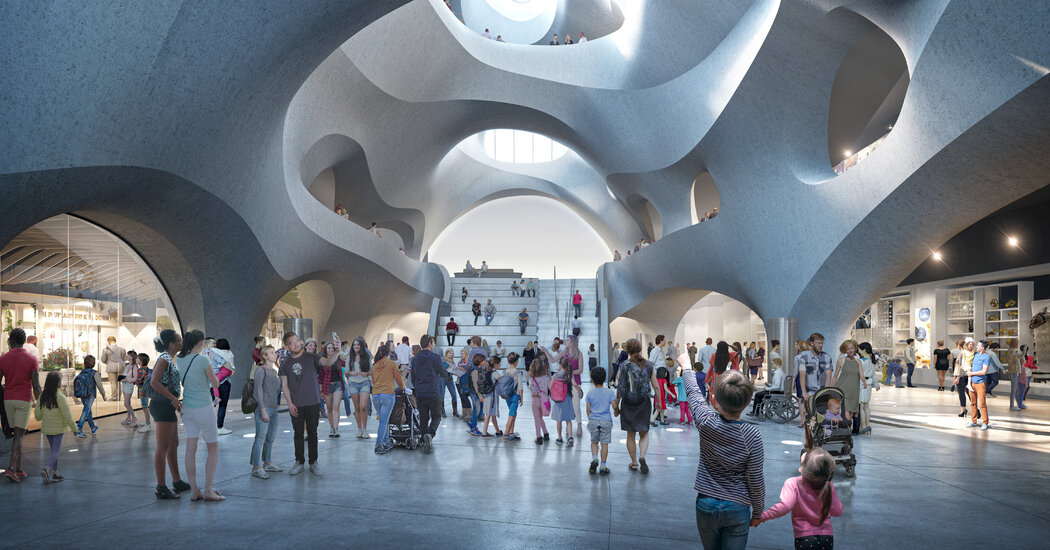 In 2014, when the American Museum of Natural History first announced plans for a major science-focused expansion, museum president Ellen V. Futter spoke of the “gap in public understanding of science.” at the same time many of the most important questions have science as their foundation.

Now, in a world that has been transformed by the mounting dangers of climate change and the coronavirus pandemic, that concern has become increasingly pressing, Futter said, and it has informed the construction of the Richard Gilder Center for Science, Museum’s $431 million education. and Innovation, the details of which were revealed on Monday, as well as a new opening date for next winter.

“This is only intensifying and becoming urgent in a post-truth world where we also have acute threats to human health in the form of the pandemic and to the environment,” Futter said in an interview. “At the same time, we have a crisis of science literacy and education in this country and we have science denial.

“It’s a building for our time,” Futter said of the 230,000-square-foot structure visibly taking shape along Columbus Avenue near West 79th Street. She added that it “speaks to some of the biggest issues that we face as a society, as a natural world.”

During a recent tour of the six-story structure with an undulating stone and glass exterior, architect Jeanne Gang said the building was “about connections”. Architecturally, for example, Calvert Vaux and Jacob Wrey Mould, who designed the original museum building in 1877, used pink Milford granite for the Central Park West entrance. The same stone, from a nearby quarry, is used for the west facade of the new project.

The project also emphasizes the links between the different themes and activities of the museum — from exhibition to education; from children to academics; from dinosaurs and whales to insects and butterflies.

The building also aims to improve the physical circulation of the museum, creating around 30 new connections within 10 existing buildings so that visitors can move more easily from one area to another. “We’ve been stuck in stalemates for years,” Futter said. “They left.”

While the museum has always projected a kind of towering, impenetrable majesty, its new building is consciously more porous, with welcoming floor-to-ceiling windows that allow people to “look in and out,” Futter said, adding: “It’s an invitation.

The center’s transparency is also reaching out to the museum’s neighbors, some of whom were unhappy with the project’s initial foray into adjacent Theodore Roosevelt Park (the footprint was reduced in response). A legal challenge brought by a community group against the Gilder Center was dismissed by the New York State Supreme Court’s Appellate Division in 2019. A new landscaping design for the park by Reed Hilderbrand adds seating and new plantations.

An expanded library also aims to engage the public more with a new reading room for scholars, an exhibition alcove and learning ‘zones’ – as well as panoramic views to the west. This centering of the library puts “the scholarly side of the institution right at the forefront,” Futter said.

About $340 million has been raised so far, Futter said, including about $78 million from the city — which owns the building; $17 million from the state and $90 million in funding. Richard Gilder, a stockbroker and longtime donor to the museum, who died in 2020, contributed $50 million to the project. The center’s four-story atrium will be named after financier and philanthropist Kenneth C. Griffin, in honor of his $40 million gift to the project.

The new center will house approximately 12% of the museum’s collection, displaying objects on three floors and offering views of storage areas where scientists and collections staff can retrieve, examine and study specimens.

“Collections are alive,” Gang said. “They are still used all the time.”

“Science is based on observation, testing, proof – scientists don’t make things up – and it should be trusted,” she said. “Look at what has just happened in this pandemic: scientific research has developed the tools for vaccinations.”

“The collections are the proof,” Futter added. “The evidence is going to be in front of you all over this building.”

With exhibit design by Ralph Appelbaum Associates – in conjunction with the museum’s exhibits department – ​​the addition to the building includes a 5,000 square foot Insectarium that will feature live and digital displays; a monumental hive; and a gallery surrounding visitors with the sounds of Central Park insects.

There is also a year-round 3,000 square foot vivarium that will have free-flying butterflies and pictorial maps identifying each species in flight that are updated daily.

A 360-degree Theater of Unseen Worlds the size of a hockey rink – designed by Tamschick Media+Space and Boris Micka Associates – will deliver immersive images that will expand the lens or zoom in on nature: a rainforest, the ocean , the brain. The movements of the visitors will modify the projections of the screen.

“As a species, we are not apart of the environment – we affect it and it affects us,” Futter said. “It changes your understanding of where we belong and that we have responsibilities.”

Through the architecture, Gang said, she wanted to give visitors a sense of agency and serendipity as they followed their own sights – the ability to wander, wander and explore on their own.

“It’s about showing people where they can go and making it appealing,” Gang said, “to create landscapes of discovery.”

From Gifu to the world: an exhibition in Los Angeles to present traditional Japanese pottery

Brad Kahlhamer and the Fusions of Existence