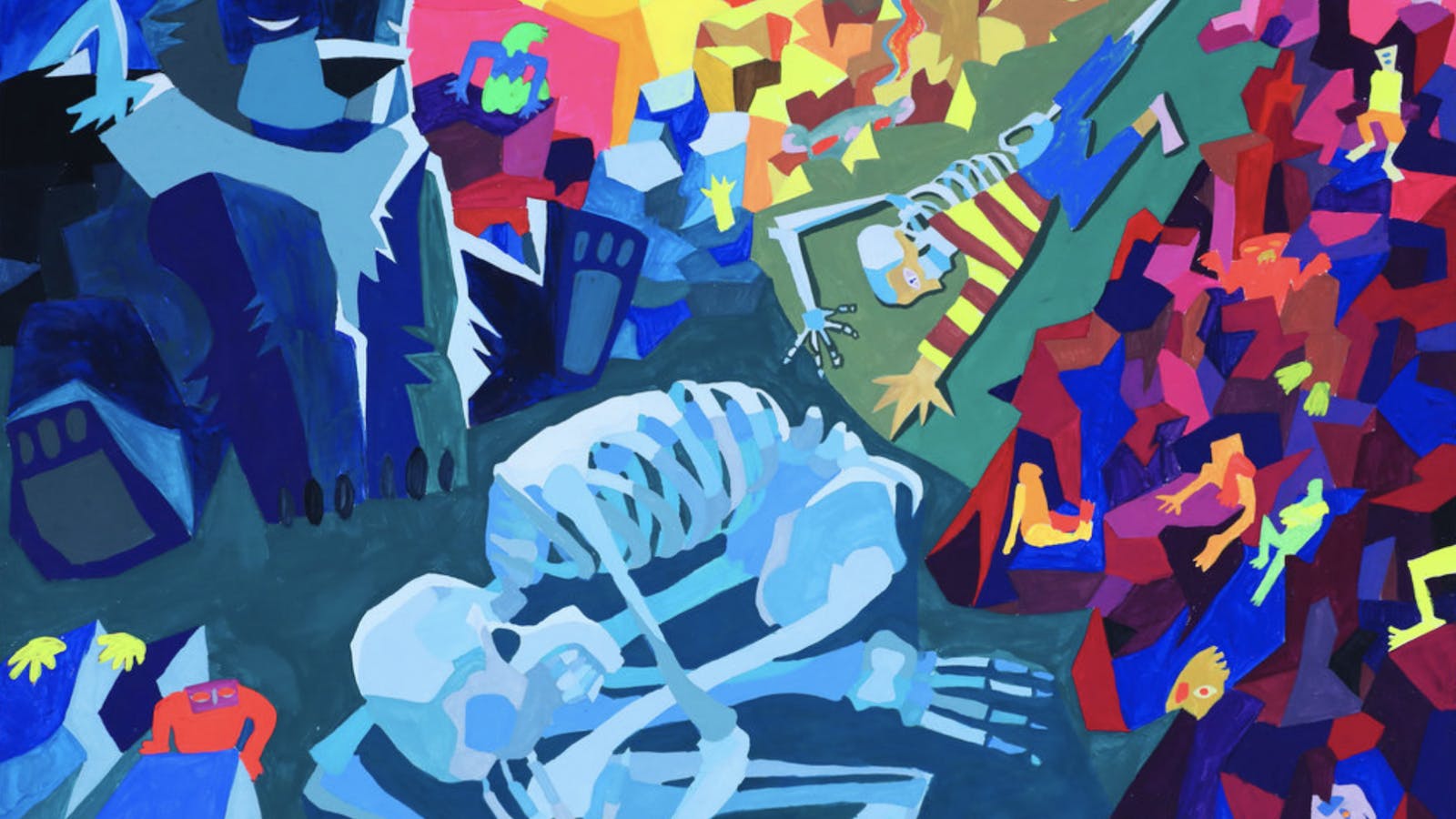 the signature of violence [a&c] – The Brown Daily Herald

One Sunday, we exploded.

Or, no, we didn’t. This is demonstrable. The buildings remained intact; the students remained standing; the roads were still there, paved with the perfection of their previous imperfections. I can see it all out the window now, historic and unchanged. But last November, in the afternoon, something exploded, and if it wasn’t the physical structures, then that something had to be our phones, at the very least. Sirens, but reduced. The banal, annoying whine of a bomb threat emanating from the speakers of our trusty digital devices.

“The university could explode (we don’t know why), so you should probably move your person if you’re currently located here or here – oh, or also here. Thanks and good night. Actually, our apologies, it’s not night yet, but you should please go inside, but not in the wrong interior, it could be bad, could be fatal, something. It’s a dangerous world out there.

We read it and blinked. We packed our bags and dragged our feet. We walked through our rooms, except for those of us who lived in rooms that may soon find their walls, floors, and ceilings reconfigured into an abstract set of rubble. We do not know where these students went. And by “we” I mean everyone.

I don’t make fun of college; I don’t care about the authorities basically. Because the dangerous something is no longer just our reality, or this country. The danger has seeped out of the Structural, colonized the Daily and has now heralded its modern monopoly on the Culture. This is perhaps the defining characteristic of Generation Z. We are not “Zoomers”, not “The Social Media Generation”. We are the arbiters of this new culture of violence. I won’t essentialize, but it is our essence.

The morning before that bloodless Sunday, an alarm shamelessly wrested me from the claws of sleep. On my phone’s lock screen awaited a notification banner, announcing a deadly drama at a concert in Houston, the city that raised me. First, I assumed bullets, naturally – a thought that washed over my recumbent body with a wave of disgusted exhaustion. Welcome to the remnants of a carefree Saturday morning, murdered on Friday night. Second, I wondered if I knew anyone at the festival, a possibility filled with both the nausea of ​​the question and the frustration of knowing it might take a long time to figure out the answer.

I was wrong on the first account. No weapons; people had trampled themselves to death for no reason. The supreme action of senseless violence. I never understood the jostling because it made no sense, but the illogical retreated to the margins of the matter, usurped by stories of chaos and suffocation. In the hours and days that followed, I learned that yes, I knew people who had survived Astrofest. My former classmates watched their musical enjoyment become mutilated by the very thing that brought them there, the mass of people eager to enjoy the event together, their entertainment spontaneously replaced by the feverish desire to stand and breathe so as they guessed their way to the edge of the crowd. My own brother was planning to go with his friends, but he had a school commitment that night. Almost all of the participants and all of the victims were members of Generation Z.

Weeks later, when I returned home for the break, I walked past the stadium which has hosted all the important concerts and cultural events of my life. Instead of giant posters announcing the next lineup, I saw duct tape. Chained and padlocked, the stadium is dressed in fashionable attire. Its exterior alerted passing drivers to events unfolding within its gates – gates that have long held the spectacles of a city, but now bear the scars of an atrocity. We’ve seen these items and we’ve come to know the symbol of such dressing intimately, just as we understood the iconography that heralded the Astroworld festival – the ginormous structure of Travis Scott’s golden head, mouth open and tongue cut out. This image, as inimitable and ubiquitous as it is, is not the ultimate signature of a generational culture.

At the festival, the music and the jets of Technicolor smoke were just openings for the stampede, the signature act. Once entertainment turned into the unforgettable tragedy of chaos, a new philosophy took over as the central spirit, as any culture does. Culture doesn’t have to be a good thing. Violence has become an entity. It became a means by which concertgoers bonded with each other. It became something bigger than themselves: it became their world.

Violence today does not need a motivation, or even a target as in its more common iterations, the product of anger or hatred or other oppressive systemic things. The violence can simply arrive on the scene without explanation, parachuting from an invisible plane, knowing that we will react with instinctive recognition – a shift to some terrified but unflappable mode of interacting with each other. Violence acts as something familiar that orients us together in place and time.

I should be clear. I’m not saying that the coverage of spontaneous, everyday violence is new. I’m not talking about a phenomenon often criticized as the glorification of violence, as with gory video games or graphic films or abusive pornography. These are all portrayals of violence within conventionally marketed qualifiers of culture. In our generation, violence needs no medium, no mediation, no artistic expression. The experience itself is enough. Brute and by rote, each ensuing destruction engraves its despotic name in our culture.

We no longer turn violence into art. We transform art into violence.

Shootings, beatings, storming of buildings, sexual assaults; Astrofest, Charlottesville, Orlando, Atlanta. The accumulation of these everyday and monumental incidents merges a diversity of experiences into a grand state of fugue that permeates the shared knowledge and interactions of a depressed generation. Newsworthy or not, each incident becomes known by a name, the connotation of where it happened or the force that enacted it. Our ability to recognize these names, invoke them at the appropriate times, and feel the constant weight of their memory and future possibility is in itself a culture. If culture is what it means to socialize collectively, participate and apply the recognizable signifiers of a community, I express my identity as a young person in reaction to the siren. To be young today is to suffer from an acute sense of knowledge that originates in the viscera and metastasizes, subsuming the flesh. A body knows how to sigh, tremble, flee, stroll, anesthetize and cry in the same instant. As bruises and blood seep into every inch of our interest, Gen Z are crafting all the appropriate responses, behaviors and emotions to learn personally and practice collectively.

Get The Herald delivered to your inbox daily.

Our reactions become measurable, communicable, according to a gradient of all the necessary possibilities between blinking and shouting. We recognize ourselves in the size and flavor of our response. It’s a kind of aesthetic relationship between them through relationships with the constant horrors that come without warning. And this is how culture appears: as aesthetics. An engaging exterior that represents the vast and uncontrollable idea immersed within. Violence is limitless, but it approaches a semblance of form when our bodies and our conversations reflect its presence.

Violence itself has become a culture. And it is complemented by a shared understanding. We have chiselled a second culture of the need to respond. Our personal reactions cannot remain personal when we are inundated with the incessant public gaze. We text pictures and videos, post infographics on Instagram, and read articles in the news. We document stumbles and tragedies, streaming knowledge through the endless vortex of public engagement, from first-hand to second-hand to third, fourth, fifth, and on and on as the real contracts and warps in the ‘imaginary. But the reality is not the question for now. Our discussion is about this passage between people. Because everyone feels, or hears, or sees how violence erases the boundaries of their immediate moment. It activates the senses, like all good art. It slowly seeps in, then quickly invades, moving without direction but with a clear purpose – the entanglement of all our interactions in this miasma.

This is the knowledge we have left. If nothing else, we know each other when we flee the explosion, or when we take a video of it and broadcast it into the digital ether. Our responses are virtual, and our responses are embodied. In both cases, the understanding is collective. At least every time the next one comes, whether it’s real or just a warning, we’re not alone in the aftershocks.