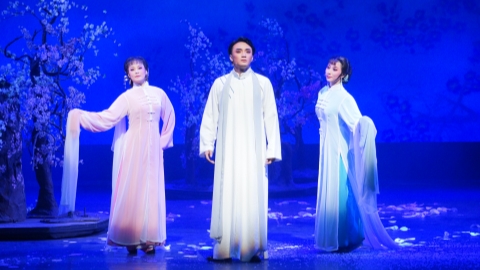 Shanghai theater companies are doing all they can to give young actors a wide range of ways to show off their skills, and new plays and short opera films are breathing new life into these art forms.

With the mentorship of Peking Opera artists, 118 young performers mastered 200 plays and classical pieces. They have been stage tested to boost their confidence.

Talent programs and performance opportunities for young musicians and performers have gone a long way to solving the talent shortage as age catches up with veterans.

From March 18, the Shanghai Yueju Opera Company and the Grand Theater of China will collaborate on the 2022 season for young performing artists.

Most of them were born between 1995 and 2000, making them the new generation of the company. They will give 12 performances this year. Together they have appeared in nearly a dozen plays and more than 80 excerpt shows.

They will present classical and innovative pieces in a variety of vocal schools and performance styles. Young performers will also demonstrate their involvement in the preservation and creativity of theatre.

The 12 shows are divided into four categories: spring, summer, autumn and winter.

“He Wenxiu” and “The Peacock Flies Southeast” will kick off the spring category from March 18 to 20. The experimental shows “Ties of a Green Robe” and “Twelve Roles” are among the highlights of the summer category, which runs June 10-12. From September 2 to 4, “Taming the Princess” and contemporary drama “The Family” will be included in the fall category. The legendary pieces “The Green Jade Hairpin” and “The Butterfly Lovers” will be performed in the winter category from December 2 to 4.

The youngsters will not only showcase their vocal and performing talents of Yueju opera from the classics, but also offer fresh, creative and cutting-edge works as part of their repertoire.

“The Butterfly Lovers” is often called China’s “Romeo and Juliet”. It is a tragic love story between a poor young scholar, Liang Shanbo, and Zhu Yingtai, the daughter of a wealthy family. They return as butterflies after they die.

“Twelve Roles”, which will be presented this summer, is largely inspired by the American film “12 Angry Men”.

The 12 members of the jury, all from different backgrounds, must deliberate to decide the fate of a child in a murder trial marked by doubt. The various singers of the Yueju Opera beautifully depict the distinctive traits of the jury members. The contemporary piece also serves as a philosophical reflection on themes such as economic imbalance and family discord.

“The Family,” a new adaptation of Ba Jin’s famous novel, tells the story of the decline of a large aristocratic family in 1920s China while simultaneously celebrating the courage of the younger generation in their fight against feudalism.

Yueju Opera, which developed around 1906 in Shengzhou, Zhejiang Province, is one of the most popular operas in China due to its singing styles and melodies.

According to director Liang Hongjun, the performance season for young performers is in its fifth year and has become a feature of the troupe’s image.

In addition to this, they worked with BesTV to create a short Yueju Opera video series on the 24 solar terms of the traditional Chinese calendar. The show will air on BesTV’s streaming website as well as on city bus and subway screens.

“We have a responsibility to nurture young performers and give them multiple opportunities to learn, practice and demonstrate their abilities,” Liang explained.

Each year, the China International Arts Festival in Shanghai and the China Experimental Xiqu Exhibition provide opportunities for emerging artists of traditional opera to perform.

In recent years, many young traditional opera performers have gained a devoted following among students and young professionals by broadcasting how they prepare for a concert and revealing behind-the-scenes anecdotes about makeup and costumes with mobile apps. on video websites.

Various initiatives have been taken to make traditional art forms more accessible to young people today, including the creation of short opera films and innovative theatrical interpretations of popular tunes.

“Xiqu (traditional theater) has enormous potential to captivate today’s youth as it can be imaginatively blended with various art forms,” ​​says theater critic Chen Daming. “Young performers have an important role in the dissemination of art.”

Baltimore School for the Arts fundraiser returns in 2022