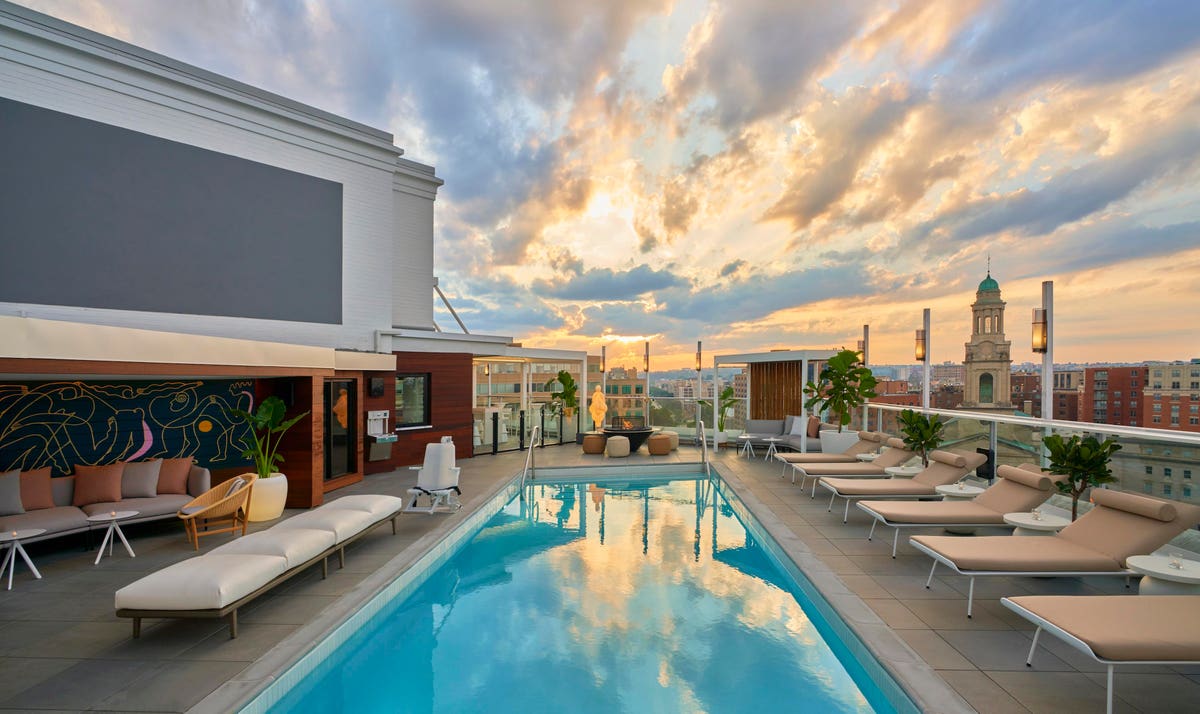 In 2018, Andrea Sheehan, CEO of Dawson Design Associates, had the idea of â€‹â€‹a new type of hotel: an interactive space with a strong emotional impact dedicated to celebrating the achievements of women. She brought the idea to her client, Pebblebrook Hotel Trust, which invests in high-end properties around the world. â€œI had a PowerPoint presentation that started with the ancient warriors and then the Egyptians, the Greeks and all the women throughout history speaking out, fighting for change,â€ Sheehan explains. â€œThen I showed them the new generation. At that time, the election had just happened and we had a new Congress with so many women. And I said, ‘I think it’s time we tossed our hats into the mix. I want to create an elegant and cool hotel, but at the same time powerful and feminine. And I want the warriors to be the art.

Right in the middle of his presentation, Sheehan remembers Pebblebrook CEO Jon Bortz telling him to hold on. â€œI thought, ‘Oh no, I’m going to get canned.’ I’ve worked with him for twenty years, so I know him pretty well, but I really didn’t know how he would react to it. According to Sheehan, Bortz has brought all of his asset managers and officers together. â€œHe said, ‘Let’s start over,’â€ Sheehan said. â€œWhen I came up with my concept for a portrait of Ruth Bader Ginsburg made out of hand painted stamps, everyone in this corporate boardroom leaned back in their chairs and gasped. “

The result? â€œThey loved it,â€ Sheehan says. “And they gave me a full artistic license, to go ahead.”

welcome to Hotel Zena, the world’s first women-themed hotel. Located in Washington DC’s trendy Logan Circle neighborhood, between downtown and the 14th Street Corridor, the property is everything Sheehan envisioned, and more.

The exterior of the building is adorned with an epic seven-story painting of two warrior women by Cita Sadeli (aka Miss Chelove), a DC-based muralist. As you enter the hotel, you are greeted by female-inspired artwork that has been hand-selected and commissioned by Sheehan, from a sculpture of Otrera, the first Queen of the Amazons, to an installation by recycled high heels lining the reception.

â€œI traveled the world looking for feminist artists, men and women, who supported power and strength,â€ Sheehan explains. â€œIt was important to me that it wasn’t propaganda, that it wasn’t anger. I wanted it to be good, intense storytelling.

The lobby also serves as a portrait gallery with works of art dedicated to 10 legendary women who have contributed to gender equality, from Rosa Parks to Shirley Chisholm. Towering over it all is that badass beacon of power, the Notorious RBG, whose stunning portrayal was constructed from 20,000 biodegradable tampons provided by socially responsible company Cora, which gives back to women in need in third world countries.

â€œRuth Bader Ginsburg is a personal hero of mine because I’m sure I wouldn’t be where I am without her. So I wanted to celebrate it, â€Sheehan says. â€œFor me, this room was the perfect setup: a presence that dominated the entire space. We created the architecture, the floor plans, the ceilings – everything – to curve towards her.

It is not just the artwork that is about the theme of women. Figleaf, the bar / lounge, offers a cocktail menu that pays homage to female icons like RBG, Amelia Earhart and Marie Curie. (Check out Figleaf’s wall which is covered in 12,000 protest buttons supporting the fight for women’s rights.) The hotel’s gift shop is full of products inspired by women, from books to games available for sale or that can be used on loan while you ‘stay at the property. The fitness center features powerful messages (“Wake Up, Kick Ass”) and an Instagram-perfect pink punching bag with coordinating boxing gloves. The the hotel also hosts events ranging from book launches by female authors to drag queen bingo.

No surprise, the hotel has become a favorite spot for female travelers (although men love it too). On my recent visit, I met a woman who had been on vacation with her boyfriend before and was so moved by the powerful messages, like quotes from RBG in the elevators, that she decided to come back with it. her young child for an inspiring mother. girl trip. I met a group of women who said they were here for a girlfriends getaway. Another client who comes to town regularly for business told me that she started staying here after being harassed at another DC property and that she chose the Zena Hotel for her safety and security.

It is also popular with locals like Kaitlin Calogera, founder of A visit in itself, the first tourism company in Washington, DC to focus exclusively on women’s history. His company has organized events in the establishment and regularly brings its guests there on tour. â€œHotel Zena is unique in its vision and presence as well as its execution,â€ says Calogera. â€œIt’s a different kind of tourism outside of traditional museums. It’s interactive. It’s dynamic. And while there are hotels that have stories of women’s history in their origins, I think Hotel Zena makes it stand out and to the fore in a way that’s extremely accessible and easily absorbed by visitors. Quite honestly, it’s Instagrammable too. It’s the age of social media and people want to see a life-size RBG made out of tampons. “

Another thing Calogera appreciates is the hotel’s proximity to the White House. â€œPeople don’t often realize that suffragists were the first people to picket the White House. They were the first to stand outside with signs demanding the right to vote, â€Calogera explains. â€œSo when I visit the Zena Hotel, I remember that not only is the hotel a space for expression, but the surroundings are rooted in feminism and activism.â€

Calogera launched A Tour of Her Own in 2018, just when Sheehan came up with the idea for the Zena Hotel, and she says there’s no better time for the two concepts and no better location. than Washington, DC when we saw nearly 500,000 women at the Women’s March in Washington, DC We saw activists show up at the Supreme Court building. We have seen major events and movements like Me Too and Time’s Up and a wave of women making their way to elected positions. We saw the election of our first female vice-president, â€says Calogera. â€œDC is a hub for what’s going on right now, but it also helps connect people to the past and how we got here. “

And indeed, that’s exactly the idea Sheehan was after when creating the Zena Hotel. â€œThe goal is to celebrate all the women who dare to stand up for change,â€ Sheehan says.

The 9 Best Hotels in New York for a Stay